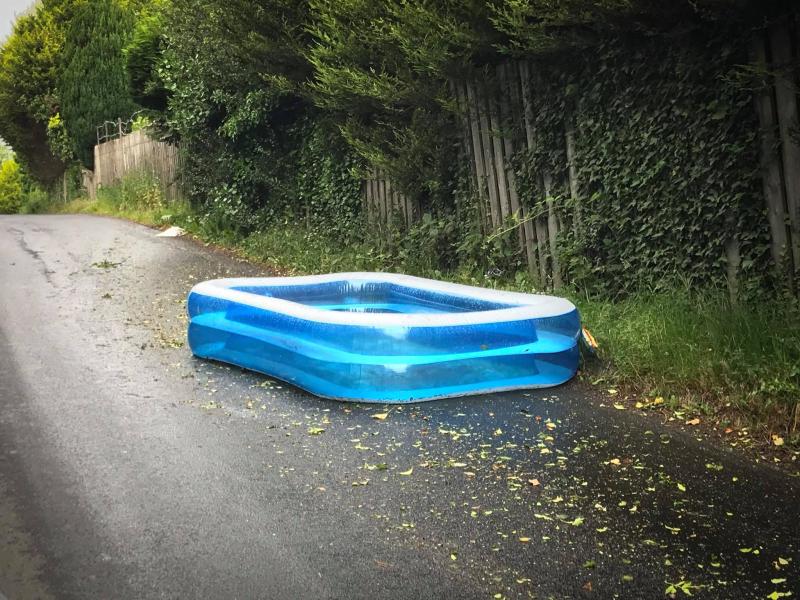 Above: One witty Derry Facebooker, Kevin Morrison, gave us a taste of the Irish Summer and showed how Storm Hector had come just days after a good spell of weather to steal away some local children's paddling pool! There were power outages in thousands of homes in Derry due to Storm Hector but, as we count down the hours to the end of the weather warning at 3pm today, the city has escaped relatively unscathed. Over 2,000 homes in the city were affected and NIE (Northern Ireland Electricity) were working to restore the power that was lost due to the 'severe' weather conditions. There were also a number of fallen trees including one in Brooke Park, however, there were more in rural areas with some reported to be on the roads at Temple Road, Glenshane Road, Foreglen Road and Drumahoe. Springrowth Landscape and Garden Centre also had to close their doors to the public because of the adverse weather conditions. A spokesperson said: ‘We will be closing our gates to the public. ‘We had a lot of damaged done last night and we've lost a few hundred pounds worth of plants. ‘So, for health and safety reasons, we think it's better to keep the gates closed. It will give us time to clean up too.’ However, despite the disruption, some managed to see the funny side of Storm Hector. In true Derry style, one witty Facebooker, Kevin Morrison posted the photo above and said: 'Coshquin Road this morning - #IrishSummer - get the paddling pool out for the wains.....days later......mammy where’d our paddling pool go ??? #StormHector'.
ADVERTISEMENT - CONTINUE READING BELOW