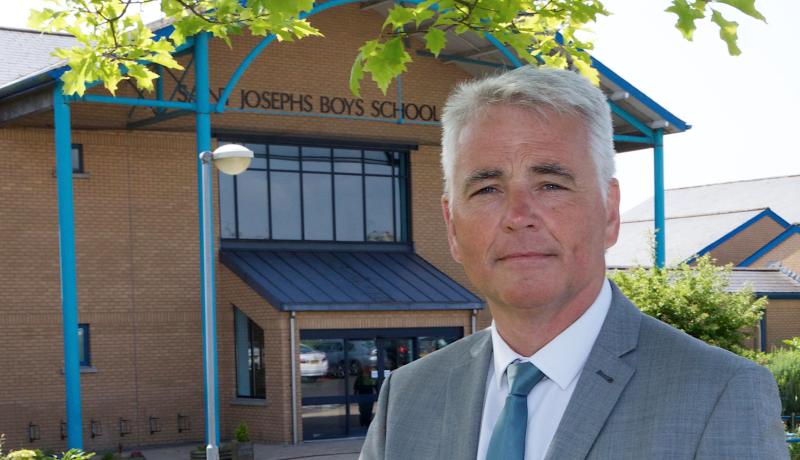 By Marianne Craig THE principal of Derry’s biggest all ability boys’ school is retiring this summer after 11 years in the job. Damien Harkin has been in the profession for 36 years and began his career at an all-girl grammar school in Strabane, where he was head of maths and a senior teacher. After 22 years he moved to Dungiven as Vice Principal of St Patrick’s, but was promoted to Principal just four weeks later when the presiding principal left. Mr Harkin returned to his home city in 2007 when he took up the post at St Joseph’s Boys' School in Creggan. Speaking to Derry News earlier this week, Mr Harkin reflected on his past decade in the post. “It was lovely to come back and I found being principal in a city I knew to be a very different experience,” he recalled. “People know you. “They know where you are from and who your family are and I’ve had some of own relatives come through the school too which has been lovely.” Having experienced all types of secondary schools during his career, Mr Harkin added he believes a co-educational mixed ability model works best, and that the time of academic selection has ‘passed’. “It has been tremendous to get a flavour of different types of schools,” he continued. “St Joseph’s is a completely non-selective school, that might be seen to be under the shadow of some of the grammar schools like Lumen Christi and The College. “Boys are coming to us with lower self-esteem and they shouldn’t feel that way. “The time for academic selection has long passed. “Teaching children all together shows them not everyone is good at books, or maths or sport but everyone is good at something and we should value It all equally.” Mr Harkin said one of the proudest moments in his time at St Joseph’s was when a school inspector asked a Year 8 pupil what they thought of the school. “They said ‘You can yourself, you don’t have to hide. You can show your true ambition and we are all there to help one another’,” he continued. The Creggan man says he will use the next six months to relax and take stock and plans to spend more time at Redcastle golf course, and with his 14-month-old granddaughter Roise Rooney. “I think keeping fit is very important, especially as you get older and I believe it helps your mind and body and that is something we try to instil in the boys,” Mr Harkin continued. “Being principal is a very privileged position and the decisions you make can have a big impact. “I always made my judgements based on what was best for the boys and how could I make that happen. “But it’s a big responsilbility, always making those decisions.” Mr Harkin said he has been lucky to work with an amazing team at St Joseph’s and praised the ability of the staff to capture the students’ attention. “When you have the immediacy of iPads and social media and game consoles capturing pupils’ attention and keeping it is very difficult,” he told the Derry News. “There needs to be a recognition that teachers need time out of the classroom to prepare thought provoking lessons and not overwhelmed by all the work that surrounds that. “This is the most skilled set of teachers I have worked with over my time and the icing on the cake for me is that the vice principal Miss McCarron is taking on the role of principal. “I’ve worked with her for 11 years and there is no better person for the job.”
ADVERTISEMENT
Advertise with Us
ADVERTISEMENT
Advertise with Us
ADVERTISEMENT
Advertise with Us
ADVERTISEMENT
Advertise with Us