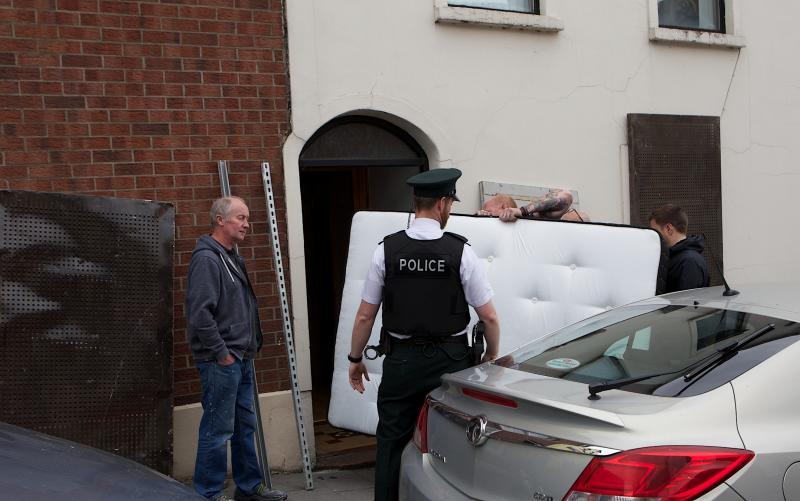 A Derry father has spoken of his anger after officials he described as ‘bailiffs’ attempted to evict him and his two-year-old son from their home in the city centre. The incident occurred yesterday morning in the Great James Street area where representatives from the Enforcement of Judgments Office (EJO) attended the address to serve what they have said was a ‘court order’. The officials were accompanied by PSNI officers after the EJO requested their support. The incident resulted in the street being blocked off as furniture and other belongings were removed from the house and into a lorry. However, they halted their actions and left the area after they were challenged by a number of local councillors and the owner of the house. The owner of the house has revealed that the court order in question was a repossession, which he has claimed ‘was not a valid document’. Speaking to the Derry News, Eoin Meenan, who lives at the property, spoke of his shock at the incident which he said left his young son ‘really upset’. “I was lying in bed on Tuesday morning, my two-year-old son was with me, and I heard a banging at the door,” he said. “When I opened the door there was two bailiffs standing there, one of them put their foot in the door and said they had a court order to repossess the house.” He added: “They just barged on into the house and the police were with them, and they started lifting stuff and taking it out into a lorry. “They were just walking around my son who was sitting on the floor crying his eyes out by this stage and I was in a state of shock. “They even had those large steel grilles out to put over the windows.” He added: “I contacted the landlord to see what was going and he came down right away. “Thank God that he was able to challenge them and they left because they were going to throw us out of the house there and then. “You wouldn’t think this kind of thing could happen in 2018.” The owner of the property told the Derry News that the officials from the EJO were unable to produce the proper paperwork and therefore had to ‘abandon’ the operation. The man, who did not wish to be named, added: “When I was contacted by Eoin, I came straight down. “When I got there they were taking beds and mattresses out of the house and I asked them what they thought they were doing, as these are tenants who pay their rent. “They told me that they were serving an order for repossession due to me owing money for the mortgage, which isn’t right. “They then showed me the paperwork and the right name wasn’t on the order, so they abandoned the operation.” He continued: “There’s now 28 days to see what can be done here.” Commenting, the independent councillor Gary Donnelly described the measures taken by the EJO as ‘draconian’. “I think everyone present at the scene was shocked at how this was handled,” he said. “Whatever issue this department had, there was no need to go in and try and throw people, including a young toddler, onto the street. “There is really no need for such draconian actions in this day and age.” The Sinn Fein councillor Mickey Cooper added that the situation was ‘very stressful’ for the tenants. “We have serious concerns about the way this planned eviction was handled. It was a very stressful situation for the family involved,” he said. “The whole policing operation was over the top. “The street, which is a main arterial route into the city centre, was blocked for several hours with police vehicles.” He continued: “It is very clear there are far better ways to resolve issues around housing before it gets to these extremes and that is what we will be pursuing with the resident, landlord and appropriate authorities.” The PSNI confirmed that police officer were there in a support capacity and to manage traffic. PSNI Chief Inspector Paul McCracken said: “Police were present this morning at the request of the Enforcement of Judgements Office and our officers were there to support their staff. “Due to the presence of a large vehicle blocking a one-way street as part of the enforcement operation, police were on scene to manage traffic. He added: “Anyone with a complaint to make about policing can contact the Office of the Police Ombudsman, and no inference should be drawn from that.” Meanwhile, a spokesperson for the Enforcement of Judgments Office said: “Officials from the Enforcement of Judgments Office attended a property in the Great James Street area to give effect to a court order.”
ADVERTISEMENT - CONTINUE READING BELOW