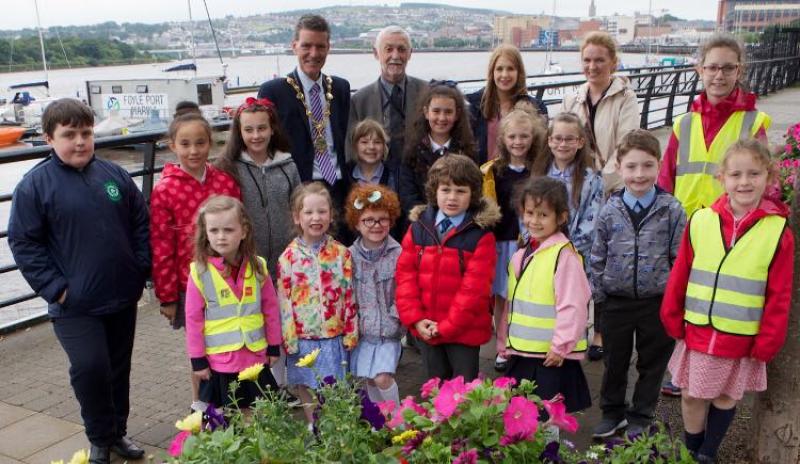 Children from a number of schools around Derry are taking part in a Council organised initiative by the grounds maintenance team to encourage schools to get involved in our Pride in our City/Community Initiative. The project is part of the Derry and Strabane District Council's 'Plants Ahoy' scheme. Children from schools around the city will help plant flowers in planters which will be located along the quay in pots that they painted and decorated themselves. It is an essential part of the council's work to make the city bright and vibrant ahead of this year’s Foyle Maritime Festival. As well as include the youth in our communities and to encourage their creative expression. Mayor of Derry and Strabane District Council, Cllr. John Boyle, speaking at the launch yesterday said he is excited about the potential the scheme has to encourage our young people to be creative and take an active, positive role while engaging with their community. “Derry and Strabane District Council is honoured and overjoyed to be able to play a role in the Pride in our City/Community initiative, which encourages local people to enhance and take pride in their communities. "I would also like to thank all the local schools and children who took part in the initiative, it is truly heart-warming to see the young people of our community taking such an active interest in bettering their city and we are very impressed by their Maritime themed designs that will be used to decorate the sides of the pots.” Danny McCartney, Parks Maintenance and Cemeteries Managers with Derry City and Strabane City Council, said that these initiatives are essential in enhancing our green space and floral displays across the council area. He also stated how it is important to make our city more vibrant, which would not be possible without the help and collaborative partnership between stakeholders and organisations across the council area who strive to enhance the environment in our community and the quality of life for citizens. He added: “Planters from the Plants Ahoy scheme will be placed along the quay, where they will be on display throughout the summer months, I believe this effort to brighten the city will boost morale of those in our community and will be essential for us when competing in civic and environmental competitions such as NI’s best Kept Award, Co-operation Ireland Pride of Place, Britain in Bloom and Ulster in Bloom.” Pictured above: Mayor John Boyle and Danny McCartney, manager, grounds maintenance, Derry City & Strabane District Council, with pupils and teachers from St. Anne's PS, St. Patrick's PS, Broadbridge PS and Hollybush PS at the launch of the "Plants Ahoy" scheme. (Photo - Tom Heaney, nwpresspics)
ADVERTISEMENT
Advertise with Us
ADVERTISEMENT
Advertise with Us