MIND THE GAP! Urgent action called for after dozens of potholes appear at stretch of road on Derry street 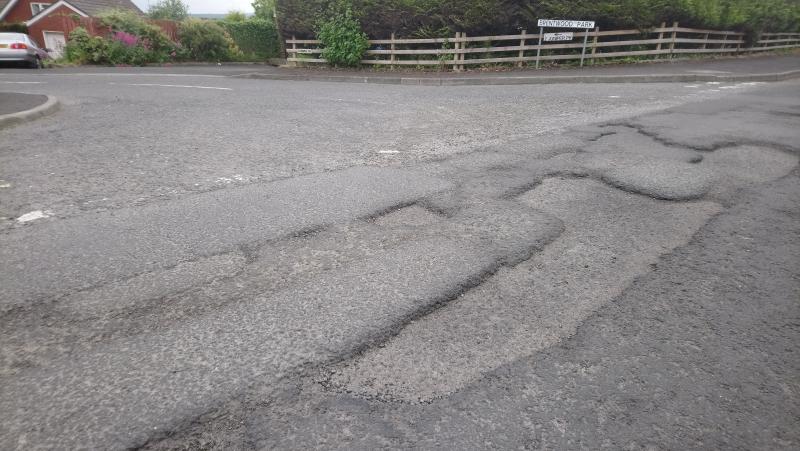 RESIDENTS of a street in Derry have demanded a government department take urgent action to repair a road which has been left badly pockmarked due to dozens of potholes. The potholes emerged on a short stretch of road in the Foyle Springs area, and has resulted in drivers having to avoid it due to cars having already being damaged. The issue was raised by the Mayor of Derry and Strabane, SDLP councillor John Boyle, earlier this week, where he described the situation as a ‘ridiculous situation’. “I have not seen any other short stretch of road in the city which is as bad as this one,” he continued. “The stretch of road affected measures no more than a couple of hundred yards and has deteriorated rapidly since the onset of winter.” He continued that he has asked Transport NI on ‘numerous occasions’ to address the problem. “On each occasion it was explained to me that the potholes aren’t deep enough, that budgets are tight and that the Department has set particular criteria and guidelines which apply to when a pothole can be filled,” he added. “This is a ridiculous situation. “Vehicles are being damaged and such is the condition of the road that drivers are weaving around the potholes. “Excuses and red tape are clearly not what the residents of Foyle Springs want to hear, they are fed up with the situation.” Cllr Boyle added that nothing short of the entire re-surfacing of the road will be enough to address the problem. “It is so bad now that it is my belief that the entire road needs resurfaced and I have put in a further request to Transport NI to immediately address the situation by carrying out that work,” he continued. “Residents want action and it is a disgrace that it has taken so long to carry out very basic repairs.”
ADVERTISEMENT - CONTINUE READING BELOW