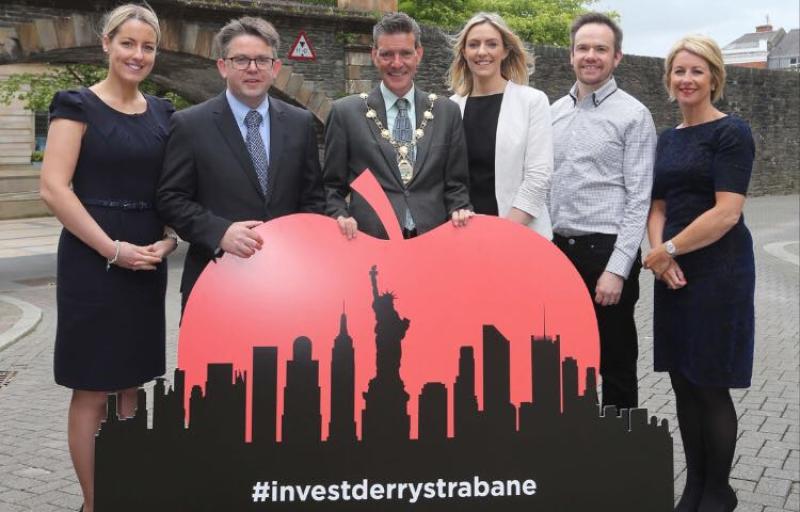 Audiences in the United States will hear first-hand about Derry’s unique Halloween celebrations when details of this year’s celebrations will be revealed at an event in New York this week. A Council-led delegation will travel to New York to promote the city and district ahead of the departure of the Clipper Round the World Race when the yachts depart to sail direct to Derry to be part of the city’s momentous Foyle Maritime Festival celebrations. Local actor and performer Peter Davidson will travel with the group to bring his unique one-man Halloween show to the US, showcasing how the city has made Halloween its own and is the best place in the world to celebrate Halloween. Mayor of Derry City and Strabane District Council Cllr John Boyle who will travel as part of the delegation, says it is important that the city tells the world how great Halloween in Derry and Strabane is and actively markets the city and district as a must-see Hallloween destination. He commented: “Derry’s Halloween festival celebrations are already renowned across the world – we have been voted number one Halloween Destination in the world by USA Today and ranked in the top six Halloween destinations by the New York Times, so it’s really important we go out there and showcase what we have to offer to that international audience and encourage them to make a date in their diary and come and experience it for themselves.” Aeidin McCarter, Head of Culture with Derry City and Strabane District Council says that Derry Halloween has established itself as a unique visitor experience in Northern Ireland and now that the 2018 festival is to be extended to a week-long celebration it is important that we step up our promotion of this event and claim authentic ownership of Halloween by telling our unique story of Halloween to a global audience. She said: “Derry Halloween has established itself as a unique visitor experience in Northern Ireland. It is a home-grown festival that offers visitors a unique and authentic experience, by drawing on the City’s rich artistic, historical, cultural and architectural offering creating bespoke, fun and quirky happening with wide appeal. “It was created by the people of the city 32 years ago and enjoys mass support from local people, arts, cultural, business and tourism initiatives from across the region. Key to the Councils support is how it continues to encourage the development of new, innovative and imaginative festivals and participative events year on year.” Jacqueline Whoriskey is the Festival and Events manager with the Council and is hugely excited about bringing Derry’s Halloween story to New York. “We will be promoting the festival to a new audience in New York by engaging with tour operators and tourism partners to actively market and promote the city as a fantastic place to visit for Halloween.” Peter Davidson, who will perform two shows at the New York Irish Centre during the trip, said he was very excited to be bringing his 'Grimm Tales for Kids' to the US to help launch Derry's world famous Halloween Festival in the 'Big Apple'. He commented "It's a show I've loved doing at Halloween at The Playhouse and has a really special place in my heart. It's a fun filled anarchic show that I developed with Kieran Griffiths with the sole purpose of being as much fun as possible for kids but also silly enough to keep all the adults giggling as well. It's a take on fairytale stories all mixed through with the off-beat humour we're famous for in the North West." Peter added: "It's always been an ambition to perform in New York and to be able to do it with this show is a dream come true. It's a fantastic opportunity to show the real family friendly and funny side of Derry at Halloween. Our warmth and quirkiness is legendary and if I can recreate even a smidge of the atmosphere you get at Halloween here then the American audiences will be in for a treat." Derry International Halloween Festival for 2018 will run from 27th October – 3rd November 2018, and include a programme of over 100 events in over 40 venues across the city. Among the key attractions is a three-night supernatural evening animation trail on the City’s historic Walls entitled Awakening of the Walls, a Hunted Harvest Street Market, Shapeshifter Costume Workshops and Competitions, a Jack O’Lantern Festival featuring Celtic history, pumpkin carving workshops; Ghost tours and trails including Game of Throne and Star War themed tours, the world’s biggest fancy dress street party and a magical Halloween Carnival Parade and Fireworks Display. Concluding the Mayor said he was delighted that there was a very strong emphasis placed on attracting international audiences to Derry and Strabane for Halloween. “We are committed to working with our partners in the US and NI in aiding us to position the city as a destination of choice for key international media, tourism and business audiences to ensure that everyone can be part of this very unique celebration in our city,” he said. Representatives from Tourism Ireland, Invest NI and the NI Bureau will also take part in the visit that will see the delegation engaging with tourism and cultural organisations to strengthen business, tourism and civic links between the North West region and the US. Further details about 2018 Halloween festivities can be found at www.derryhalloween.com or follow us on Facebook /halloweenderry and on Twitter @HalloweenDS Pictured above: Mayor of Derry and Strabane, Cllr John Boyle, will head up a delegation from Derry who will travel to New York and unveil plans for this year's Halloween celebrations.
ADVERTISEMENT - CONTINUE READING BELOW