'Full STEAM Ahead' as Derry pupils learn through film-making 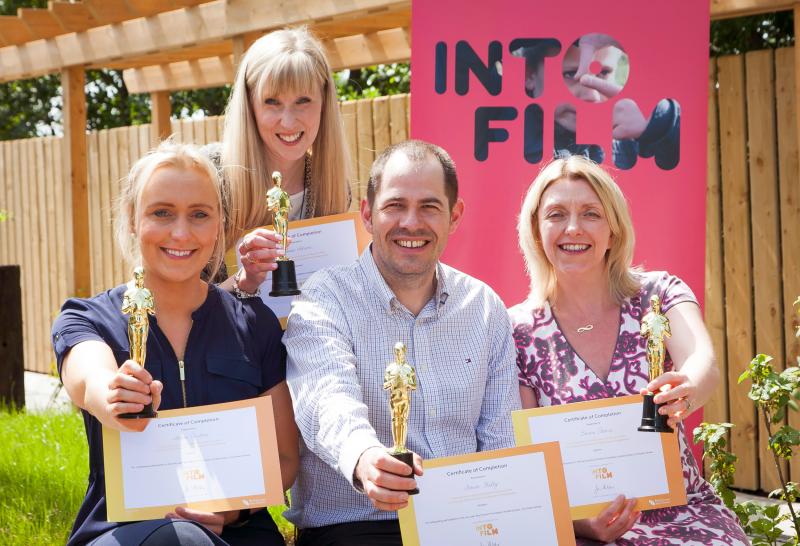 Two Derry schools, Ebrington Primary School and Eglinton Primary School have partipated in a two year project where pupils were taught film analysis to help improve their literacy skills and filmmaking for ICT and engaging with subjects across the curriculum. ‘Full STEAM Ahead’ is a two year project that uses film-making as an educational tool, enabling pupils to make their own films and learn skills such as stop motion animation, storyboarding, script writing, filming, , the use of green screen to use different film backgrounds and how to edit film clips to create a final film. The project, run by Into Film in partnership with the Nerve Centre in Derry and Nerve Belfast, instructed teachers how to use film in the classroom to develop and support learning. It was funded by the Paul Hamlyn Foundation’s Teacher Development Fund. Project co-ordinator, Nichola Clarke of Into Film, said Full STEAM Ahead was the most rewarding project she has ever been a part of. “It’s been amazing to see teachers grow in confidence and develop a creative approach to the curriculum using film. I’ve seen teachers begin this project with no prior experience in using film literacy or curricular film-making, to having just delivered their own CPD (Continuing Professional Development) session to their staff in these areas. “What this means is that every pupil in participating schools will be given the opportunity to engage with the curriculum through film, and that is what makes this project such a great success.” In the first year, Full STEAM Ahead offered Key Stage Two teachers in ten schools the opportunity to develop and support learning through analytical film watching and film-making. In Year Two the project continued with seven of the original primary schools, focusing on developing teachers’ leadership skills and preparing them to take on the role of film leader within their schools. While initially two teachers and one senior leader (a principal or vice principal) participated from each school, the project ended up impacting the whole school staff, and their pupils. The project celebrated the end of two years of teaching and creativity in schools with a final sharing event held at the Seamus Heaney Home Place. Senior leaders delivered presentations on the success and impact the project has had in their schools, while pupils’ work was showcased and awarded prizes. Each teacher received a film-making kit with two iPads and accessories to support them to continue their high level of film-making within the curriculum. For more information about Into Film go to www.intofilm.org. Pictured above: Receiving their awards are Alana Coulter (Kilronan School); Claire Adams (Kilronan School); Steven Kelly (Phoenix Integrated Primary School) and Emma Cormie (Eglinton Primary School) who all participated in the Full STEAM Ahead project run by Into Film and the Nerve Centre and funded by the Paul Hamlyn Foundation. The project uses filmmaking skills to improve literacy and numeracy among Key Stage 2 pupils.
ADVERTISEMENT - CONTINUE READING BELOW