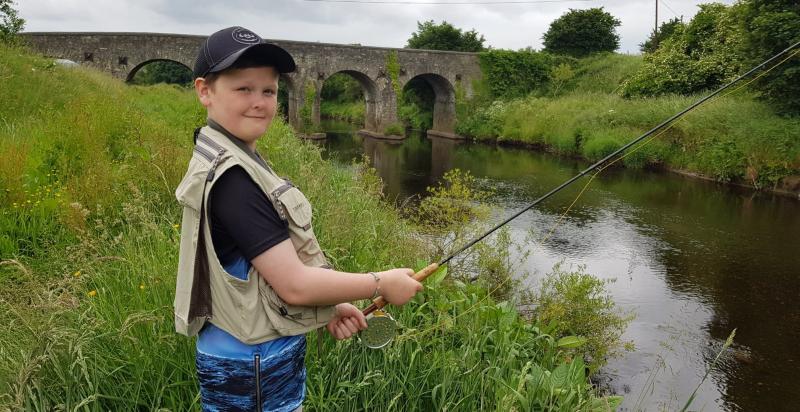 A 12-year-old Derry boy been awarded the title of ‘Young Irish Country Sports Writer of the Year’ in a countrywide competition for young people under 15. Luke McCourt won the writing competition organized by Irish Country Sports & Country Life magazine and The Great Game Fairs of Ireland in conjunction with Tourism NI and Antrim & Newtownabbey Borough Council. Luke, who will leave Steelstown Primary School in a few weeks to begin secondary education at St Columb’s College, shared his love of country sports and the countryside in a 600 word story that captured his first experiences of learning to fish and cook his catch with father, Derry’s celebrity chef and author, Emmet McCourt, who also happens to be a fly fisherman of note. Albert Titterington, Director of the Great Game Fairs of Ireland, said: “We asked young people to tell us about special day out in the countryside; a day they’ll never forget. “It could have been out an account of any traditional country pastime, or simply a memory of enjoying the great outdoors, but it it was Luke’s story of trying to master angling which won the judges over.” With Father’s Day having just passed last weekend, the touching story of a father and son bonding over their pastime hit the right note for the judges. “Just like Luke, many of us were taught to fish by our fathers so the essay really struck a chord and raised many a smile of recognition amongst the panel,” said Mr Titterington. “Passing on skills and knowledge from one generation to the next is at the very heart of country sports, so we all felt Luke had captured something very special in his story.” Luke’s prize package includes having his story published in the Irish Country Sports & Country Life magazine which has a massive readership worldwide. Luke will also receive two modern country classics; books specially selected to encourage his writing skills by Paul Morgan, proprietor of Coch-y-Bonddu Books, one of the largest retailers of books on the countryside, plus a year’s membership of The Countryside Alliance. Luke’s enthusiasm and talent have also earned him a day’s fishing at the Birchwood Fishery, Omagh; a year’s subscription to the magazine, and a family ticket to the largest ever Irish Game Fair at Shanes Castle, Antrim, with its huge range of attractions for the whole family including a ‘put and take’ fishery for children. Mr Titterington added: “I am delighted that our competition has proved such a fantastic incentive in encouraging young people to think and write about their countryside experiences. “Who knows what a catalyst it will prove to be for Luke McCourt and the other entrants. I look forward to meeting young Luke – and getting a few angling tips from him – when he collects his prizes at the Shanes Castle Game Fair on June 23-24, and where he can really enjoy all the fun and excitement of an event which combines living history, country sports and family fun with a huge Fine Food Festival. “Who knows what inspiration he and all the other youngsters will find there.” Pictured above: Young Luke won the judges over with his touching tale about fishing with his Dad.
ADVERTISEMENT - CONTINUE READING BELOW