Is this worst road in Derry? Resurfacing work to be carried out after flood of complaints from residents of local housing estate 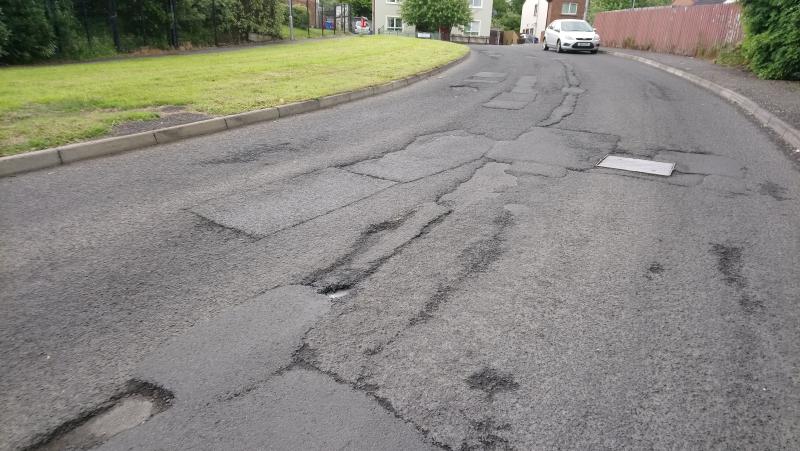 A busy road at the entrance of a housing state in Derry is to be completely resurfaced later this year after a flood of complaints about its current condition. The entire stretch of road into the Cornshell Fields estate is strewn with large potholes, with previous attempts to fill in some of the gaps resulting in a patchwork layout which some motorists claim has only worsened the situation. The Derry News visited the area earlier this week and spoke to a number of residents of the area, some of whom said that accidents had almost resulted from motorists driving on the wrong side of the road to avoid the potholes. “It’s the one thing everyone comments on when the drive up, I mean, how could you not, look at the state of it,” one motorist told the Derry News. “There’s been a lot of coverage in the media about potholes but I’d daresay you’d be hard put to find a worse road than this in Derry. “It’s so bad that I know that people who don’t even live here have driven up to see it for themselves. “You can feel your car rattling all over the place when you drive up it, it’s a suspension wrecker.” Another driver told the Derry News: “It’s awful, and if there was another way of getting into the street then I would use it, but we’re stuck with this.” The independent councillor for the area, Warren Robinson, said that he has been ‘inundated’ with complaints from residents of the area in relation to the issue. “People are really getting fed up with the lack of action being taken over this, as these potholes are now causing damage to vehicles,” he said. “The temporary measures used to fill them in before haven’t worked. “When people drive up here, they’re just taken aback at how bad the road is.” The Derry News contacted the Department for Infrastructure (DfI) about the issue, and while it did confirm the road would be re-surfaced, it did not say when the work was scheduled to begin. “Cornshell Fields is on the Department’s programme for resurfacing later this financial year,” a spokesperson said. “In the meantime, the road will be maintained in accordance with the Department’s maintenance standards with repairs carried out to any potholes meeting the current criteria for repair.” Commenting, Cllr Robinson, gave the news a cautious welcome. “It’s not before long, and while the news is to be welcomed, the contractors need to get on site at the earliest possible date before there’s a serious accident here,” he added.
ADVERTISEMENT - CONTINUE READING BELOW