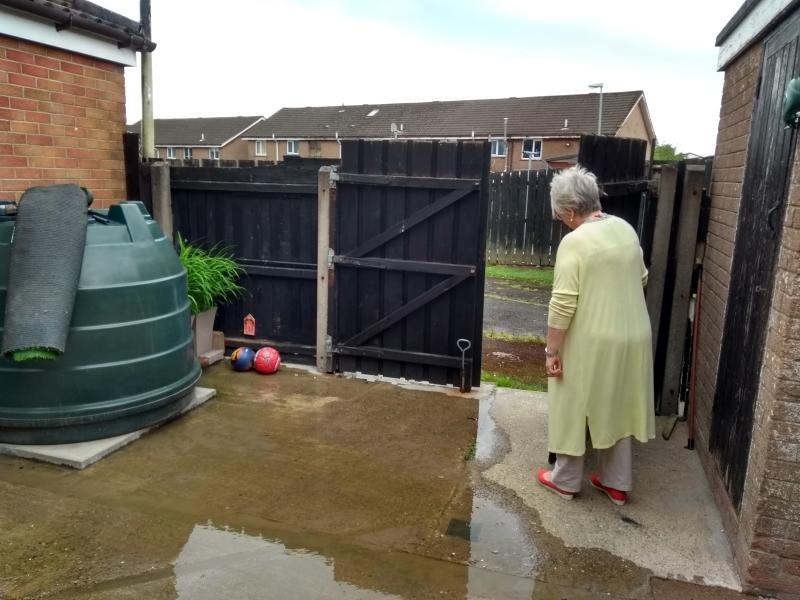 A Derry woman whose back yard has been plagued with sewage problems for twenty years feels that those capable of solving the problem aren’t listening. Jean O’Doherty believes the cost of fixing the sewerage system is the real issue and if the same problem arose in another area of the city it would have been dealt with. Her next-door neighbour, Natalie Smith, faces the same predicament and says it may force her out of the property. Jean has lived in Glencaw Park for over forty years and for around half of that time has been forced to deal with sewage in her back yard. The problem started when new houses were built at Leafair Gardens and the sewage system was unable to cope with the extra demand, she said. NI Water have attended on numerous occasions to clear blockages, but no permanent solution has been found which means Jean has to deal with the same problem every year. Jean said all sorts of items have been removed from the pipes including a chimney sweeper’s brush, bricks and wipes. “They would say it’s not you that’s causing it, but whatever way the pipes go I have two manholes in the yard which join up and result in blockages.” She’s fearful of taking a shower in her own home in case the water rises in her back yard and can’t allow her grandchildren or pet dog go outside. When the problem arises a ‘terrible stench’ travels through the entire house and waste can rise up over the back step to the level of her door. “I feel like I’m a lone voice, like a wolf out in the wilderness and nobody is listening to me,” she said. “It’s probably going to cost them too much and that’s why they won’t do anything. Myself and my neighbour are having to cope with it every year, and sometimes more than once a year. “And there are certain areas of the town where if it happened it would have been resolved by now.” At one stage, the sewage rose to such a level that it flowed into the square behind Jean’s house and there was ‘uproar’ from members of the community whose homes were impacted. Over the years Jean had to take measures to reduce the impact on her family by concreting the back yard as the garden had become contaminated with sewage and she couldn’t let her young children play in it. She added that NI Water assured her that engineers had been appointed to carry out a survey on the system but ‘nothing ever came of it’. “I just feel as if I’m banging my head off a brick wall and I’m not getting anywhere because nobody seems to listen to me,” she said. “The problem keeps occurring. I’m now wondering if there is any solution; they even said they put down CCTV cameras, but they couldn’t find anything.” There are plans to update the sewage system in another part of Galliagh which is a development Jean would welcome in her own street. Her nextdoor neighbour, Natalie Smith, has experienced the same difficulties since moving in ten years ago and she can’t allow her young children outside to play because of it. Natalie said: “I don’t know what they’re going to do but they need to do something about the sewage. “It’s just a constant battle and wild disheartening when you’re living somewhere like that and have wains. It has nearly put me out of the house, there have been many times when I’ve felt like getting up and leaving it. “That’s the position I’m in, I’ve always wanted to stay and have that house but now I don’t even want to because of the constant bother I have. “Around Christmas I came home and the back yard was overflowing. All of their toys were there and they were completely ruined as it was coming in the back door. And I was left for a full 24 hours before someone came out to see me.” She added: “NI water keeps saying it’s caused by wipes but it can’t be, there is a bigger problem that has to be resolved. “The stuff that’s swimming in through it you wouldn’t believe, nobody else would tolerate it. That’s the hell we’ve been living in for years and years.” A spokeswoman from NI Water said members of staff have attended ‘several blocked sewers at this property in the Galliagh area since 2007’. The ‘majority of blockages’, she explained, have been caused by people flushing unsuitable items such as wipes and sanitary items down the toilet. She added: “Results from our crews indicate that the majority of blockages are caused by inappropriate items being flushed down the toilet. “Many people genuinely don’t realise the damage they are doing to the sewerage system they share with their neighbours. “The ‘harmless wipes’ they are flushing are causing havoc for those around them. NI Water will undertake another sewer investigation of the property within the week. “Customer awareness and behaviour change is the only real way to address sewer misuse; the message is simple, don’t flush anything other than paper, poo and pee and keep wastewater ‘Flo-ing’ through your drains and our network. “In the last ten years, NI Water has spent over £1.5 billion investing in water and wastewater infrastructure. “However, no amount of investment will completely stop blocked pipes if people continue to flush wipes (including flushable), sanitary items and cotton buds down the toilet.” Visit www.niwater.com for further details.
ADVERTISEMENT - CONTINUE READING BELOW