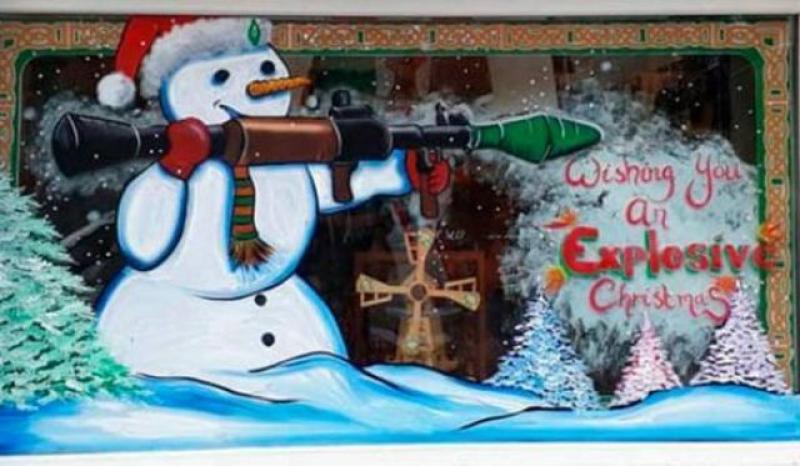 Two men charged in connection with a window display of a snowman carrying a RPG 7 Rocket Launcher and stating 'Wishing you an explosive Christmas' have had their charges dismissed at Derry Magistrate's Court. William McDonnell, of Harvey Street. and Joseph Patrick Barr, of Sackville Court, both in Derry were charged with displaying an image that was likely to cause a breach of the peace with the snowman and also of being in breach of the Indecent Advertisements Act of 1889. At today's sitting both men contested the charges. A police officer told the court he recognised McDonnell who he knew from dealing with him on a number of occasions. He said that at around 6.20 p.m. on October 24 he saw McDonnell painting the image on the window of offices belonging to the Irish Republican Prisoners Welfare Organisation (IRPWA). He was asked by Paddy MacDermtt, defence solicitor for McDonnell, if there had there been any complaints from people in the area and said there had not been. The investigating officer also gave evidence and said that while he was unaware of any complaints locally there had been 'political condemnation and momentum gathering about the image.' District Judge Barney McElholm said he 'despised violence no matter where it comes from' and went on to say that dissident republicans were 'part of a death cult.' He went on to say he 'deplored' the image and 'it is unfunny and has no place in a right thinking society' but he continued that due to the lack of legislation it did not fall into either of the two counts in front of him so he dismissed the charges.
ADVERTISEMENT - CONTINUE READING BELOW