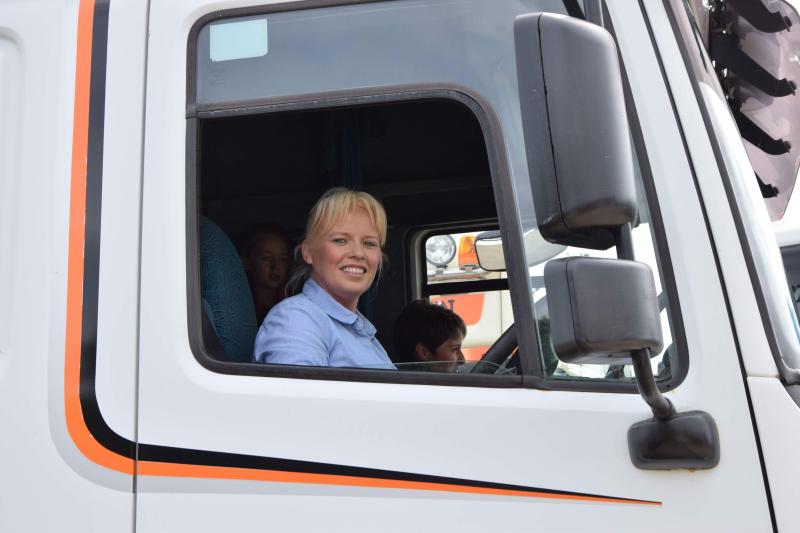 By Elizabeth Moore A lorry loving south Derry woman will this week star in the eleventh series of highly popular BBC programme, Lorry Ladies. Whilst, it is estimated that only 1% of the population in Northern Ireland are female lorry drivers. However, more and more women across the country are challenging these statistics, delivering all kinds of goods to all kinds of places whilst turning heads behind the wheel of a monster truck. Amongst this growing minority is 41-year-old, Brigid Donnelly, from Draperstown, who recently appeared alongside a number of other lorry ladies in a BBC TV documentary, hosted by Angela Rippon, that focuses on the women who live their lives on the open road. According to Brigid, who also works as an environmental health and safety officer, her lifelong passion for lorries was instilled from a young age through her father’s own business. “When I was younger, I spent a lot of time with my dad in his garage,” said Brigid, “so I got my interest in trucks from him but I took my driving skills from my mum who drove a lorry all the time.” As well as helping her father with his business, Brigid alongside husband, Paddy, both help to run the Mid Ulster Truck Festival which takes place once a year in Gulladuff. “We are part of the Mid Ulster Truckers which has been running for over eleven years now,” said Brigid. “There are nine of us in the group and so far, we have raised over £200,000 for a variety of charities.” According to the County Derry mother, her two children, PJ (9) and Sarah (11) are both lorry lovers too and take great delight in accompanying their parents to festivals around the country. “Myself and Paddy travel the length and breadth of Ireland, raising money for truck festivals and we absolutely love it,” said Brigid about her husband, who she jokingly admits has taken to the passenger seat of his own lorry. According to Brigid, the beginning of her journey as a lorry driver, came about as a “joke.” “We were helping the Sandy Arthur group at a charity event and I jokingly asked one of the members, if I saved up 5p every day until next year, could they put me through the test,” said Brigid. A few months later, Brigid received an unexpected call which would change her life for the better. “The person who I joked with from the Sandy Arthur group rang me up and told me they would like to put me through the test but I said I don’t have the 5p’s saved up,” said Brigid. However, to Brigid’s surprise, the Sandy Arthur group offered to pay for her lorry test as a favour for helping them with the truck show. “The truck show was in August and I passed my test in March,” said Brigid who was then asked to lead a convoy of lorries at another festival. For the Draperstown woman who dedicates most of her time on the road behind a wheel, she wouldn’t have it any other way. “I love seeing the look on men’s faces when they realise it’s a woman driving,” admits Brigid, “but it’s great to be able to prove to everyone that a woman can do a mans job.” If you missed the True North: Lorry Ladies documentary, it is available to watch at https://www.bbc.co.uk/iplayer.
ADVERTISEMENT - CONTINUE READING BELOW