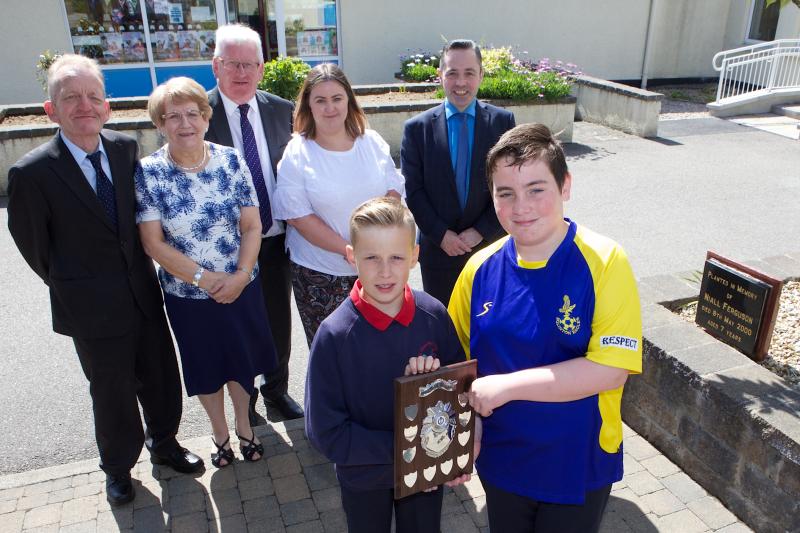 An award in memory of 7-year-old boy who died of cancer has been presented to a pupil at a Derry primary school for sporting achievements throughout the year. Niall Ferguson was diagnosed with Leukemia on May 26, 1998, when he was just five years old, and he sadly passed away two years later on May 8, 2000, at the age of seven. He was a pupil at St. Oliver Plunkett Primary School in Strathfoyle, whose staff were a great support to Niall and his family during his time there. They presented the family, including Niall’s brother Sean, with a framed poem, topped with a photo of Niall which was signed by all of his classmates. The school has also held fundraising events with the proceeds going to cancer charities. Family tragedy struck again in 2006 when Niall’s mother, Eilish, was told she had breast cancer which she battled for five years and got the all-clear in February 2011. However, in April of the same year she was given the dreadful news the cancer had spread to her lungs and was inoperable. On April 13, the day of her 40th wedding anniversary, she was given three months to live and exactly three months from that date she died, on July 13, 2011. The same year, Joe Ferguson was diagnosed with having prostate cancer. And after undergoing treatment at the Sperrin Unit - which provides chemotherapy at Altnagelvin – Niall’s father Joe passed away in December, 2016. Niall loved playing football and was a big Liverpool fan, therefore, following his death a memorial shield was set up in his honour in 2000. The first winner of the shield was Peter Doherty and coincidentally this year’s winner, Fionn Doherty, is Peter’s brother and will be the last recipient of the award. The winner was decided based on a points system for sports participation throughout the year. Niall’s uncle, John Doherty, said the school has been amazing throughout that time and he wished to thank staff as well as sports personalities who have presented the shield over the years. Footballers such as Gareth McGlynn, Ciaran Martyn, David Ogilby and Shane Ferguson have presented the award to past winners. He felt it was time for a ‘revamp’ by holding a 5-a-side football tournament for those under eight years old, the significance being Niall’s passing when he was just seven years of age. It will take place at the Strathfoyle community football pitch in July and a cup in memory of Niall will be presented to the tournament winners each year. However, John said his nephew will always be remembered at the school: “There’s a wee plaque which was put beside a tree from day one for him. I want to thank the school for carrying his memory on over the years and for how good they were to Niall, as a family we’ll never forget them for what they’ve done. “His mother and father would have always been in attendance whenever the shield was handed out when they were alive.” John also said it was important to remember Ms Elizabeth Irwin, a teacher ‘loved by all the children’ at St. Oliver Plunkett’s who sadly passed away in the years following Niall’s death. PICTURED ABOVE - Anton Ferguson (on right), nephew of Niall, presents the Niall Ferguson Sports Award to P7 pupil Fionn Doherty. Back, from left, are John Doherty, Mabel White, school secretary, Brian McLaughlin, principal, St. Oliver Plunkett PS, Lauren Jones, P7 teacher, and Eamonn Moore, incoming principal. (Photo - Tom Heaney, nwpresspics)
ADVERTISEMENT - CONTINUE READING BELOW