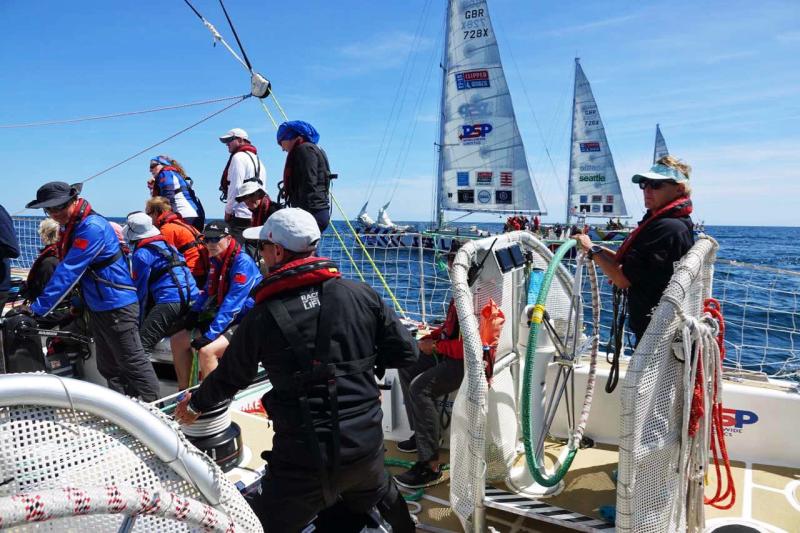 The Clipper Race fleet has captured spectacular vision of the pod of dolphins and a whale that joined the teams for the Le Mans style start of the penultimate race of the 40,000 nautical mile, eleven month circumnavigation - a two week race across the North Atlantic to Derry-Londonderry, Northern Ireland. Watch video here: http://mediaportal.clipperroundtheworld.com/race-12-le-mans-start/ The race to Ireland began in perfect champagne sailing conditions under bright blue skies off the coast of Long Island, New York, USA. Clipper Race team Sanya Serenity Coast was quick off the mark, followed closely by Nasdaq, though it quickly became apparent that it wouldn't be a straight forward start. HotelPlanner.com Skipper Conall Morrison, who hails from Derry-Londonderry and learned to sail on Lough Swilly, says: "It is thrilling to see the whole fleet so close together and be able to trump each other or see them pull away. We got treated with whale sightings and a pod of dolphins as we sail along the continental shelf on top of it all. A huge whale cruised past us as we were going along at 8 knots ... he must have been in a hurry." Great Britain Skipper Dave Hartshorn adds: "10 minutes after the Le Mans start, the point when you are free to choose your own course and point of sail, we could see coming towards a series of blow spouts of whales breaking water to breathe. "As the fleet charged forward, it was if there were large puffs of smoke from small explosions breaking out across the water between the boats. More than 200 people from all walks off life and representing 23 different nationalities are taking part in the race to Derry-Londonderry, including six from Ireland. Race 12: The LegenDerry Race is expected to take up to 19 days, with the Clipper Race fleet estimated to arrive in Derry-Londonderry between 10-14 July – just in time for the Foyle Maritime Festival. The award-winning festival will run from Saturday 14 July until the fleet departs for Liverpool on Sunday 22 July.
ADVERTISEMENT - CONTINUE READING BELOW