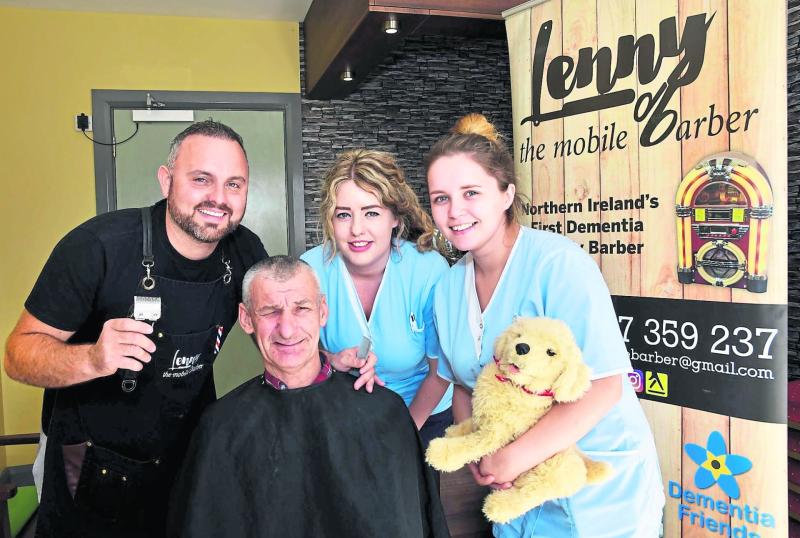 A Derry care home sought out the services of a world-renowned dementia friendly barber will treat its residents to hot towel shaves and haircuts. Lenny White visited the Owen Mor care home last week where he used his skills as both a highly trained carer and hairdresser to offer a barber shop experience to 16 men in the home who suffer from dementia. Lenny is the only barber of his kind and his services are highly sought after in both the north of Ireland and the UK, where he visits a total of 55 care homes. The Larne native has even travelled as far afield as America to offer his bespoke service and has skills have been recognised with an award from the Alzheimer’s Society. His trip to the Culmore care home came about after Owen Mor Managerial Administrator, Sarah Cartin, found out about him online. Owen Mor, which specialises in dementia care, has a hairdressers on site, but Mr White decided to set up his barber shop in the home’s bar area. “It was a really interactive experience,” Ms Cartin explained. “The men were able to queue up as they would have done at the barbers and we had Motown music playing which was really nostalgic and brought back memories for some of them. “A lot of them were very settled throughout.” Mr White also provided wireless headphones so the residents could listen to their own choice of music and it was so successful Owen Mor now plans to invest in these. “He also had an interactive robotic dog,” added Ms Cartin. “It had a heart beat and woofed so when they were sitting waiting they were able to sit with the dog and again it made them feel very settled.” Owen Mor now plan to invite Mr White for a return visit in six to eight weeks’ time. “Lenny is very dedicated and experience and he worked so well with everyone,” added Ms Cartin. “Some of the dementia patients didn’t want to come to the barber shop so he went and visited them in their rooms. “It was a really good day and we are hoping to have him back.”
ADVERTISEMENT - CONTINUE READING BELOW