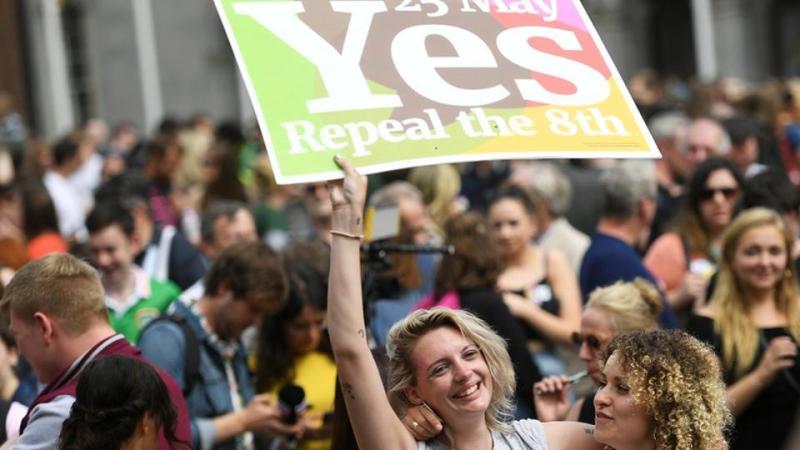 The DUP and Sinn Fein have clashed as Derry’s council agreed to support a motion calling for the decriminalisation of abortion in the north. The motion came before Thursday afternoon’s monthly meeting of Derry City and Strabane District Council. Prior to the meeting, protests were held outside the Guildhall by both pro-choice campaigners and those opposed to abortion. Tabling the motion at the meeting, Sinn Fein’s Sandra Duffy described the recent ‘Yes’ vote in the south to 'yes' vote to Repeal the 8th Amendment as the ‘civil rights campaign of this generation’, before adding that the north was being ‘left behind’. She added that women in the north were being governed by laws from ‘Victorian times’ and there was need for an immediate legal reform. Cllr Duffy continued that ‘all choices should be freely available to women’, and that ‘ideally’, this would come through a devolved government, but this was not possible due to the actions of those who opposed marriage equality and equal language rights. Her calls were backed by her party colleague, Karina Carlin, who said that she no one in a ‘crisis pregnancy’ should be denied the right to health care. Commenting, the DUP’s Hilary McClintock said the referendum in the south had ‘no impact whatsoever’ in the north. She added that while her party recognised was an ‘extremely sensitive issue’, the DUP was nonetheless a ‘pro-life party’ Other parties may have a past which disregards the taking of innocent lives but the DUP have a history of upholding the stand that human life is precious and that includes the life of the unborn child,” she added. “Abortion represents the killing of an innocent member of the human family, it is immoral, unethical and cannot be justified. “There is no such thing as a right to kill innocent people.” At that point, the independent councillor Sean Carr said that he would be voting against the motion, and wanted that to be recorded. The motion was passed with a majority vote, which resulted in clapping and cheering from pro-choice campaigners who were seated in the public gallery.
ADVERTISEMENT - CONTINUE READING BELOW