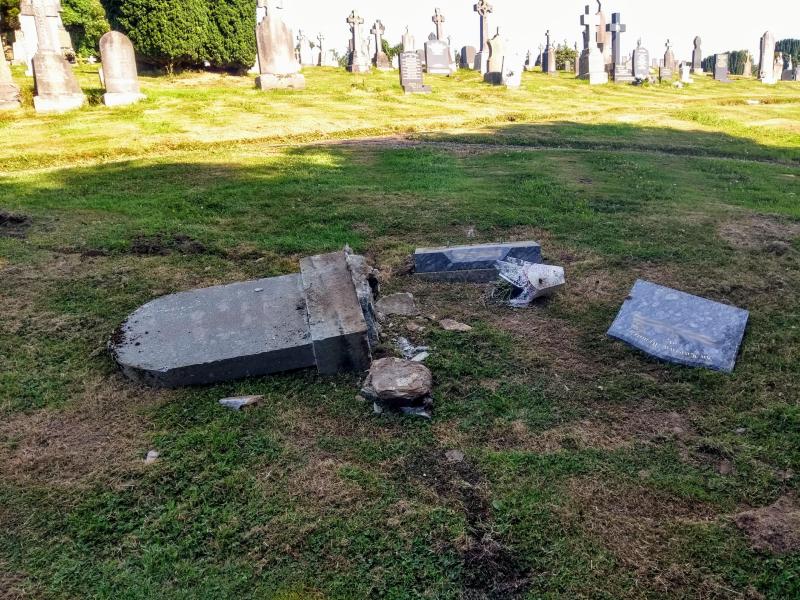 FOUR young men are being sought by police in Derry after ‘joyriding’ a car through the City Cemetery and crashing into two headstones. The incident took place around 6.20pm on Thursday evening when a BMW car collided with a police vehicle after failing to stop when signalled to do so ‘close to the entrance’ of the City Cemetery in Creggan. A local councillor confirmed that a chase ensued and after crashing, the car was abandoned on top of the gravestones, at which point the young men responsible made off in the direction of the Brandywell. Thankfully, the headstones were not irreparably damaged meaning staff from Devlin’s Memorials were able to re-mount them in their rightful place on Friday. One man visiting his relatives’ graves on Friday morning said he was unaware of the news but not surprised. He said: “Young people nowadays have no respect for the dead. It’s disgraceful that they’d come in to a cemetery and do that.” Others were outraged by the recklessness shown and blamed it on a lack of ‘solid parenting’ and ‘respect’ for their community. Tony Sheehan told Derry News: “The lack of solid parenting in Derry over the last decade is really starting to show in recent years. “It's nothing to do with lack of facilities, lack of money, social media or any of the other nonsense that is fired out. It's to do with children not being taught right or wrong at an early stage. “Not being taught about respect for our community and until we start teaching these basic principles to our kids again. “We are in a downward spiral that will continue until our city is unrecognisable.” Meanwhile, Rosaleen Osuere, who was also visiting the City Cemetrey on Friday morning, added: “When I was young we were told never walk on top of a grave, we used to take a shortcut coming from my granny’s in Bluebell Hill to Creggan and we were told it was a sin to step on someone’s grave I’m an OAP now and I still believe that.” Sinn Féin Councillor for area, Kevin Campbell, believed the young men responsible could have knocked someone down and ‘wouldn’t have given a damn’. However, he told the Derry News that he is confident CCTV cameras installed in the cemetery will identify them. “In that whole incident when the cops were chasing them, they knocked down two headstones and actually abandoned the car on top of one of the headstones that was knocked down,” Cllr Campbell said. “That’s how much respect these people have.” Cllr Campbell added: “They got out then and legged it in the direction of the Brandywell. “The good thing is that there’s a CCTV system in the cemetery and there’s no doubt that these people will be picked up, that’s 100 per cent. “The cemetery is supposed to be a place of solace for people to sit with their loved ones and here we have people who just don’t give a damn. “It’s all about what they class as fun, when there’s nothing fun about it. “There could have been people in the cemetery and they wouldn’t have given a damn, they would have knocked them down anyway. “Hopefully CCTV has picked them up and these people will be brought before the courts because it’s scandalous carry on going into a cemetery and doing that.” A spokesperson for Derry City and Strabane District Council said it is aware of the incident which has been reported to the PSNI and urged those responsible to think of the distress caused to ‘bereaved families’. He added: “Council can confirm that two headstones were slightly damaged during the incident but will be repaired. “Cameras have been installed in a number of areas in the cemetery to assist in deterring and identifying anyone involved in anti-social behaviour. “We would urge the public to be aware that the City Cemetery is a place of quiet reflection and such incidents can cause great distress to bereaved families. The spokesperson added: “Anyone who witnesses anti-social activity is asked to contact the PSNI directly or to report it to Council’s Community Safety Wardens, who also operate in the area.” The PNSI is carrying out an investigation with a police spokesperson confirming that ‘the vehicle made off into the grounds of the cemetery where it collided with two headstones causing damage to them’ and ‘four young males who were in the car at the time made off on foot.’ The police investigation into the incident is ongoing and officers are appealing for anyone who witnessed the incident or anyone with any information that can assist with the investigation to contact officers in Strand Road on 101 quoting reference 1233 28/06/18. Or, alternatively information can also be provided to the independent charity Crimestoppers on 0800 555 111 which is 100% anonymous and gives people the power to speak up and stop crime.
ADVERTISEMENT - CONTINUE READING BELOW