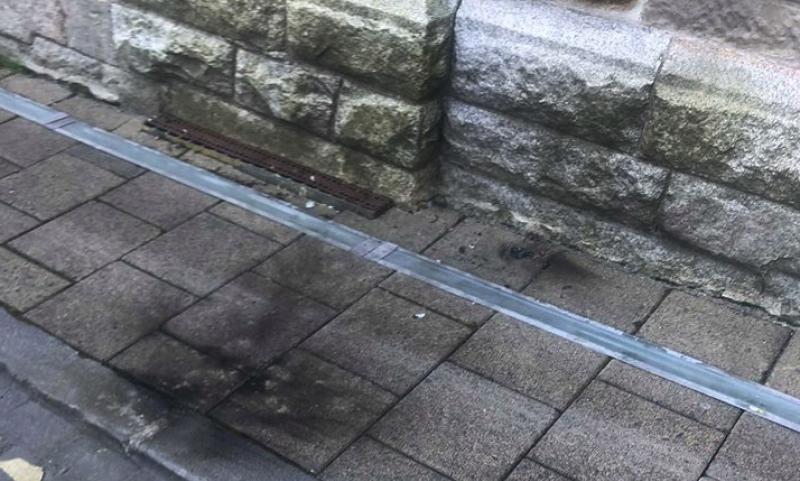 A DUP councillor has called on ‘Republican leadership’ in Derry to ‘get a grip’ on its communities following a petrol bomb attack on The Fountain estate. Alderman Graham Warke also warned that such actions could have resulted in the loss of life and asked for measures to be taken to reduce tensions ahead of loyalist parades. Around 11.15pm on June 28, three petrol bombs were thrown in to the predominantly Protestant estate at the interface between The Fountain and Bishop Street. Petrol bombs were also thrown at the Apprentice Boys’ Memorial Hall causing scorch marks, pictured above. A PSNI spokesperson confirmed there were ‘a number of incidents’ in the Bogside area of the city on the evening of June 28 ‘including three petrol bombs thrown into the Fountain.’ Alderman Graham Warke, of the DUP, said this type of behaviour ‘can’t be tolerated’. He added: “There were a lot of issues in the Bogside yesterday evening (June 28) and only this morning (June 29) we had a security alert. “Obviously these attacks on the Fountain estate need to stop, there was no tension and this is creating tension in the estate. “There’s a lot of good work happening leading up to the summer and these attacks are putting lives in danger and have to stop.” Nobody was injured and no homes were damaged but Alderman Warke said that was by luck rather than design and he suggested community ‘leaders in the Bogside’ need to do more to prevent ‘sectarian attacks’ ahead of parade season. “A petrol bomb is a device which could kill so it’s extremely dangerous to be throwing them anywhere. “I’d call on the Republican leadership to more or less get a grip of their areas and stop this from happening. "They need to stop tension, there is a lot of good work happening and the leadership needs to be showing that. “Coming up to the summer is when sectarian attacks usually start happening. The DUP are doing their best in loyalist communities and these attacks need to stop. We’re two weeks out from the 12th July parade which is in the city and the biggest parade in Northern Ireland is on the 12th August and a lot of the hard work happens in communities and the leaders in the Bogside are giving out the wrong message to young people, and they have to stop.” In response, Sinn Féin Councillor for The Moor Patricia Logue condemned the attacks and insisted ‘this type of behaviour has nothing to do with Republicanism’ but is rather the actions of a misguided minority. “The community do not want this on their doorstep and there are enough issues going on in and around Meenan Square. “Regarding the more serious incident of throwing the petrol bombs, that is totally wrong and I would ask people to desist as it could have resulted in a loss of life. "This shouldn’t be happening, but it is not the role of ‘Republican leadership’ to get a grip on their communities.” She added: “As far as Republican leadership, we do show good example. "I believe that a lot of these young people are just that, they’re children, and while they are potentially causing harm to other people, they’re also causing harm to themselves. I’d say there’s room for everybody in the community, including statutory agencies to do something to address these issues. “Republican activists have, and will continue, to do their part to get people to stay away from this type of behaviour. "But this type of behaviour has nothing to do with Republicanism, this is only a minority, it’s terrible that all of the good work done in the community is not highlighted and celebrated in the same way as the bad stuff. A PSNI spokesperson said it is ‘highly likely’ the incidents were an attempt ‘to draw police into confrontation’ and therefore asked parents and those with influence to ensure ‘young people are not getting caught up in activity that only harms our community. “There will be an increased police presence in the area over the weekend to provide reassurance to the residents and wider community,” he added.
ADVERTISEMENT - CONTINUE READING BELOW