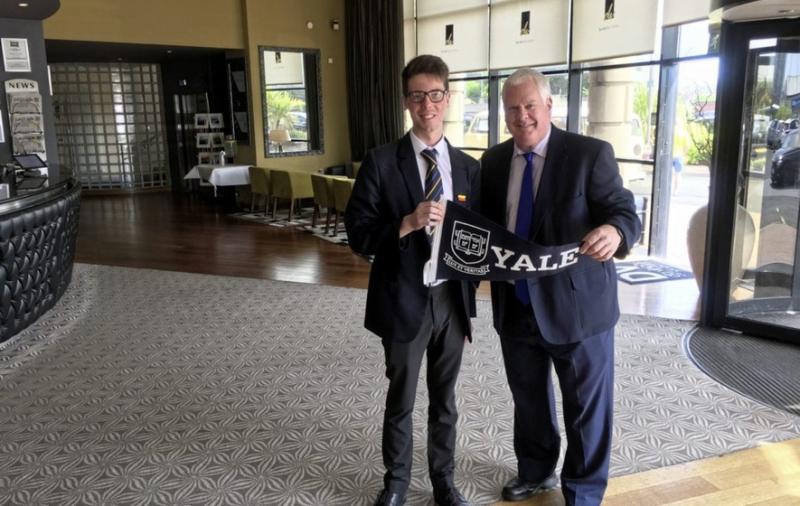 A cross community programme being piloted in Derry is giving local students the chance to study in some of America’s most elite universities free of charge. Co-operation Ireland launched the Building Bridges scheme in Derry. It is designed to help disadvantaged young people attain their degrees at prestigious universities. The programme was launched in Derry and will send six students to Yale University in Connecticut. It is then expected to be rolled out across the whole of the island of Ireland and will include other universities. Post-primary pupils from families claiming benefits including income support can apply. Financial support of up to £11,000 will be provided for those who ‘have shown that they are well qualified to take a university degree’. Lumen Christi pupil Aidan Donaghey will begin his studies at Yale next year with five other pupils from Derry. Yale is recognised as one of the best universities in the world. Keith Light, Associate Director of Admissionsat Yale, encouraged other Ivy League colleges to visit the city to look for students after being highly impressed by Derry student, Aidan. "I have rarely been to a place in all these years where the school leaders and the community leaders from all walks of life have seen the value of having their young people rise up and get the tools they need to become part of this amazing renaissance," he said. "Those are the words I used when talking about my first trip here and I hosted all the Ivy League admissions officers at a conference and I spent time talking about my experiences here and why it was different that simply going to different parts of the world." Mr Light said it was was his honour to present Aidan with the Yale Pennant to mark his acceptance to the college. Peter Sheridan, CEO of Co-operation Ireland, said Building Bridges was an amazing opportunity for the young people of the city and the city itself. He added: "I also want to thank the businessmen and women who have already contributed to the Building Bridges education fund that will allow our young people to travel to the United States for this life changing opportunity, and encourage anyone who would like to help support the programme to get in touch with Co-operation Ireland.” For more information visit www.cooperationireland.org/programmes/youth-education-programmes/building-bridges-yale-scholarship Pictured above: Derry student, Aidan Donaghey, who is set to go to university in one of the best institutions in the world with Yale Associate Director of Admissions, Keith Light.
ADVERTISEMENT - CONTINUE READING BELOW