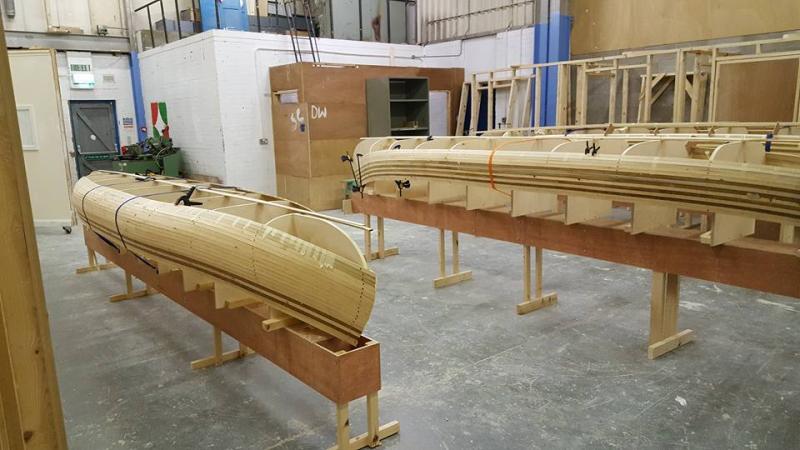 Traders and shoppers at this Saturday’s Walled City Market will have the opportunity to get an up close look at Driftwood Canoe Club’s audacious plans to build a canoe inside one week. The canoe club, in association with the North West Regional College and the Loughs Agency, will be attempting to build the strip wood Canadian canoe along Derry Quay as part of the celebrations for the 2018 Foyle Maritime Festival. The club’s fleet of four canoes took nine months each for their expert team of boat builders to complete but they will have just 80 hours to complete their mammoth challenge later this month before bringing the newly built vessel out onto the water. Markets Officer with Derry City and Strabane District Council, Nicolle Walters, said they were looking forward to welcoming the club to Saturday’s market in Guildhall Square. “We are delighted that Driftwood Canoe Club’s expert boat builders will be joining our traders and I’m sure they will bring added colour and interest to the Walled City Market on Saturday July 7th,” she said. “Members of the public will have the chance to see one of the boats for themselves, meet the club members and learn more about how they could get involved in the challenge themselves by making seats or paddles. “It is also a great chance to get more information about the Foyle Bubble Challenge which the club are hosting on the water during the Foyle Maritime Festival.” The Foyle Bubble Challenge is a fun, fast-paced and interactive canoe challenge where a three person team will tackle a themed obstacle course in a Canadian canoe at Foyle Marina. Through the city gates, dodging the water soakers, around the Guildhall and all against the clock in front of a bumper festival crowd with a live commentary. Heats will take place on Monday July 16th and Tuesday July 17th between 12 noon and 6 pm with a grand final on Saturday July 21st from 6 – 8 pm. For further details visit www.foylemaritime.com. The monthly markets in Derry and Strabane town centre are a Derry City and Strabane District Council initiative aimed at supporting local traders and increasing the towns’ offering. It is in keeping with Council’s commitment to identify new opportunities to boost business and the local economy to the benefit of everyone. If you are interested in performing at either of the markets which take place on the last Friday of every month in Strabane and the first Saturday of every month in Derry contact Nicolle Walters on nicolle.walters@derrystrabane.com. Pictured above: A boat usually takes around nine months to build but the Driftwood Canoe Club aim to build a boat in just one week for the Foyle Maritime Festival.
ADVERTISEMENT - CONTINUE READING BELOW