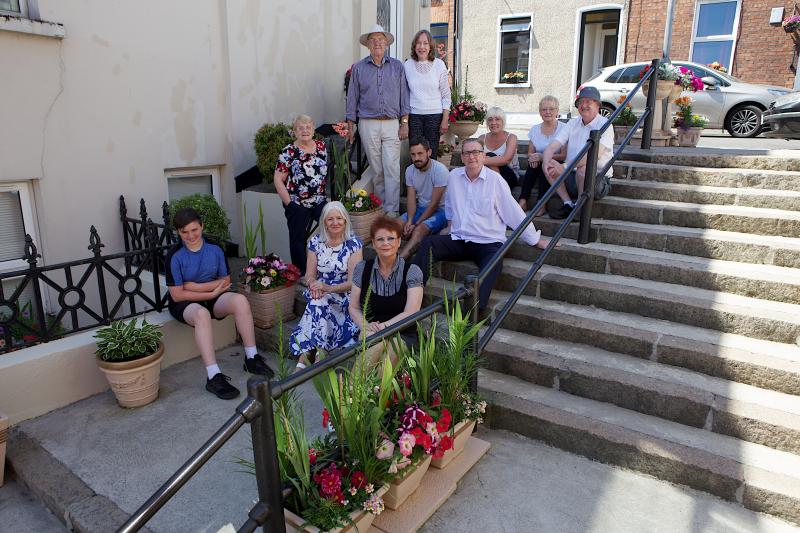 A generous Derry couple have decided to postpone their honeymoon and gift flower boxes to all of their neighbours in a truly uplifting example of community spirit. The transformative work of Maureen and Jim Nelis started with steps connecting Abercorn Terrace, Abercorn Place and Harding Street and they recently gifted flower boxes to everyone living on Harding Street. The recently married couple decided that instead of going abroad for their honeymoon they would postpone it and create their own oasis at home, a decision that is greatly appreciated by all of their neighbours. Explaining how it began with the steps and progressed from there, Maureen said: “People were very appreciative of the steps and we got thank you cards through the door, then some of the neighbours started asking could we do something else. “We were married in January and decided to postpone the honeymoon until nicer weather but when people started asking about the flowers that’s when we decided doing something with the street would be charming.” Jim added: “Instead of going away somewhere nice, we thought why not make our own place nice.” Maureen has lived in the property, in which Derry composer/musician Phil Coulter was born and raised, on Abercorn Terrace for over thirty years. And directly across the street is where Derry punk rock legends, The Undertones, were said to have made their first ever recording. When Maureen and Jim moved in together a combined passion for flowers and gardening inspired them to clean and then decorate steps in front of their home, which would eventually become award winning at an Age Concern flower show. Watering and maintaining the flowers together has brought people out on to the street, helping to cultivate old-fashioned community spirit and instilling pride in the area. People who would’ve walked the longer route along the Abercorn Road to get to Harding Street now take a short-cut up the steps to see the flowers. “Elderly people can stop on the landing and have a breather and a look around and then walk on up the steps,” said Jim. They believe most of the hard work has been done with the introduction of planters and boxes, and it won’t cost much to look after them. It’s a matter of collecting bulbs, seeds and other items as time goes by to further embellish. Jim and Maureen believe that terraced housing throughout the city has the potential to be showcased in such a way, as their architecture lends itself to window decorations in the form of flower boxes. “It catches your eye, if you stand at the top of the steps and look down, it’s lovely, you see all the flowers. And if you go over to the other side you can see everything because of the way the streets align. We even dander across to have a look ourselves,” Jim said. Maureen also commented: “Terraced housing is charming. And I think the outside of homes are as important as the inside, when you come home you should have a nice feeling. “There are people around here in different trades, others who are retired or looking after children. They’re all working people and I think they should have a nice place to look at as they come and go, and a pleasant atmosphere whenever they return to their street.” The area can be repurposed depending on the season, and around Christmas time the steps have been remodelled to incorporate lights along the rails, which helps set the mood for the festive season. Neighbour, Noeleen English, is a long-standing member of the community having lived there since 1963 and someone who knows it better than most. She along with other residents have expressed their gratitude to Maureen and Jim. “I’m delighted, it is absolutely stunning. I have people visiting my home who look around in amazement, it is literally the wow factor. It encourages the residents to keep their area nice and to take pride in how it looks.” SDLP MLA Mark H. Durkan visited the area and he believed it was a gesture that showed ‘the real goodness that exists in people.’ “Not every street will have a generous neighbour or the means to do this but I’d certainly call on Council to work with communities to see if there’s anything they can do in that regard to help people. "Because not only does it dramatically improve the physical appearance of the street but it’s beneficial “In terms of community cohesion, you have people out watering their plants and talking to one another, it oozes positivity. “Neighbours have been showing other visitors the work that has gone on and it really instils great pride in the area.” Derry City and Strabane District Council confirmed that residents will be treated to a Mayoral reception to recognise their efforts in the coming weeks. The Mayor, John Boyle said: “When I heard about Jim and Maureen Nelis’s thoughtful gesture I really wanted to meet them for myself to thank them personally for their generosity and community spirit. I’m really very moved by the personal sacrifice they have made to benefit their neighbours and their community – it’s an example to us all. “I hope their sense of neighbourliness spreads beyond their street and inspires other people to join together and make the changes they need to improve their community areas to the benefit of everyone.”
ADVERTISEMENT - CONTINUE READING BELOW