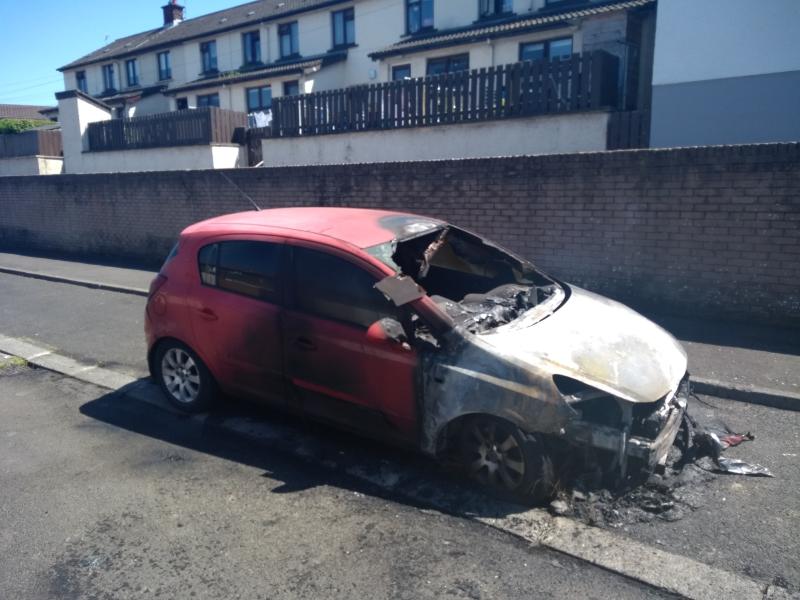 Residents living in the Rosemount area of the city have spoken of their shock after a car was torched during an arson in their street earlier this week. The Northern Ireland Fire and Rescue Service (NIFRS) was tasked to deal with the incident in Meadow View Crescent in the early hours of Tuesday morning. One fire appliance attended from the Northland Road Fire Station after a call was made by a member of the public at 12.42am and the fire was extinguished at 1.04pm. A spokesperson for the NIFRS stated that the fire was ‘deliberate’. Around midnight eyewitnesses claimed to have seen a man walking past dressed in black and others said an individual made off on a bike. Independent councillor for the area Darren O’Reilly said the ‘arson attack’ had caused ‘panic’ in the street, particularly among elderly residents who had spoken of their shock after hearing the bang caused by the blaze. Cllr O’Reilly said: “Apparently what happened was the car had broken down a few days before and a mother and child got out of it. “They were waiting on their mechanic, but he was out of town at the time on holidays and was supposed to deal with it the next day, but it was set alight. “The whole street was out, it’s a quiet street with a lot of elderly pensioners and people were just panicking and a lot of people were awakened by the bang.” Cllr O’Reilly added: “It’s alarming that this kind of behaviour is going on and there has been a pattern over the past eighteen months of this type of behaviour in and around this area. “And it’s not welcome.” He added that eople living in the area were also worried about young people interfering with the car if it was left in the area, but it was removed on Tuesday afternoon.
ADVERTISEMENT - CONTINUE READING BELOW