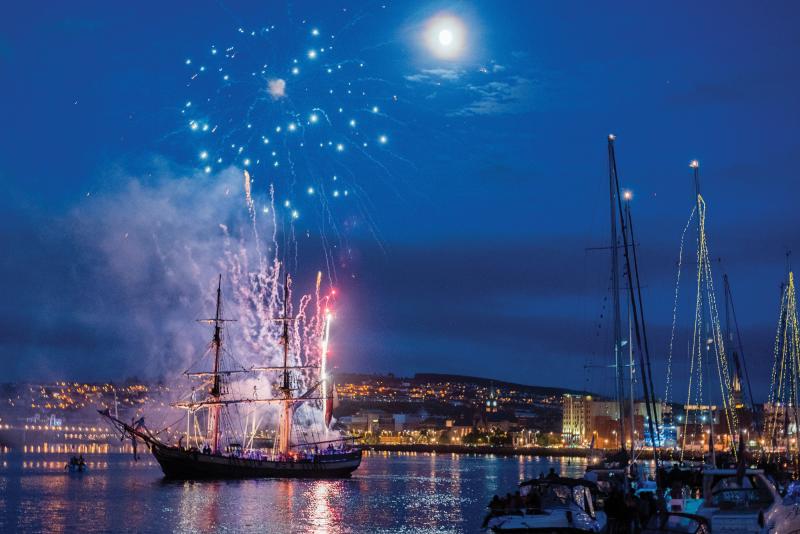 Derry Girls from the 1940s era; an Irish pirate queen; aerial extravaganzas; music and dancing; a parade of light; all ending with the Peace Bridge lit up and a double fireworks display… Foyle Maritime Festival 2018 will excel itself with this year’s showcase spectacular Voyages to be staged on Friday, July 20th. Entertainment will get underway that evening with various performances up and down the riverfront and visitors are encouraged to amble along the length of the quay taking in all that’s on offer. Every few steps they will stumble upon yet another awe-inspiring act, before moving on to the next. From Sainsburys to the Peace Bridge, hours of amusement is on show in short stunning productions on land, on boats, on water and in the air. The Foyle Maritime Festival is brought to you by Derry City and Strabane District Council with the support of Tourism Northern Ireland, Foyle Port, Loughs Agency, DuPont Kevlar, Diageo, NW Regional College and Translink. Tourism NI Chief Executive John McGrillen said: “The signs are that we’re going to have another record year for visitor figures so we’re delighted to be able to support world-class events such as the Foyle Maritime Festival, which are full of colour and pageantry and play a vital role in helping us to attract visitors and spend to Northern Ireland.” Helena Hasson, Foyle Maritime Festival co-ordinator with Derry City and Strabane District Council said: “Voyages promises to be a breathtaking spectacle showcasing the city in all its glory with the River Foyle the stunning jewel in its crown. It is also a wonderful chance for all our fantastic local performers to showcase their talent to thousands of visitors at the Foyle Maritime Festival. Entertainment along the quay throughout the evening will climax in a show-stopping double fireworks display over the water at 11 pm. “Wherever you are, you will get a wonderful show. Voyages will deliver stories of love, wonder and adventure along the Quay - we are all voyagers in time, we all have a story to tell.” On this evening, the River Foyle releases its tales. Before Manannán Mac Lir, flanked by The Gaels, returns our Voyagers of the Foyle to the waves. We will be captivated by Voyages of the Heart. Will our Derry Girls The Andrews Sisters stay or is it off with the Navy to Americay? Be enchanted by Voyages of Wonder where flying sea creatures and a lonely fisherman regale with a fantastical tale. Be entertained by Voyages of Adventure where sailors and pirates of old are brave and bold. Journey through time in an evening spectacle of music, dance and theatre all along the Quayside culminating in an illuminated parade of light and fireworks display on the River Foyle. The casts come from the area’s best arts programmers and beyond, including Echo Echo, Fidget Feet, Glasgowbury Samba, In Your Space, NW Carnival, Sollus Cultural Promotions, Studio 2, CCÉ Baile na gCailleach, Cholmcille Pipe Band, Eden Place Arts, Zero Waste and more. Everywhere you turn you will be bowled over by music and shows, from Samba Sailors to Poi Performers, interactive dancers to street performers, swing and big band sounds to a piano stage and the ever present amusements and market. Wherever you go, you will see something amazing. As darkness descends, the riverside will only brighten as the Parade of Light sees all the boats glow – from the Clipper Race yachts to the Tall Ships, the private sail boats to the traditional Brian Boru – as they set sail from Sainsburys to the Peace Bridge and back. Interwoven among them all will be a stunning flyboarder, wearing a special illuminated night-time fly suit. A welcome return to Derry will be the waterfall pyrotechnic over the Peace Bridge before the showcase finale when, for the first time, two barges will be on the River Foyle to end the evening on a high with a synchronised fireworks extravaganza. The showcase begins at 8 pm and continues until 11 pm, it is advised to bring warm clothing and wear suitable shoes. For traffic and travel information, visit: www.foylemaritime.com
ADVERTISEMENT - CONTINUE READING BELOW