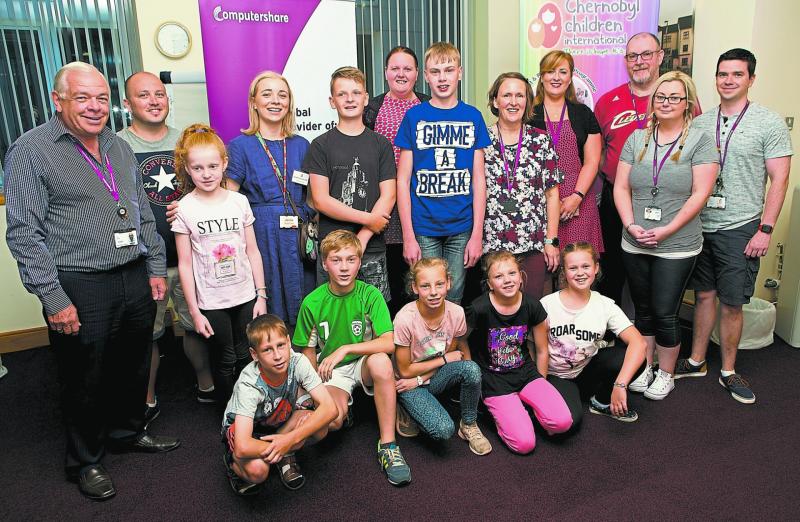 A Derry company has showered children from Chernobyl with clothes and gifts, reducing some of them to tears of happiness. Last week seven children from Belarus, who are currently enjoying a four-week trip to Derry, were invited to the Computershare Loan Service (CLS) offices in the Ulster Technology Park were they had a party, games and treats. CLS linked up with the local charity Foyle & Inishowen Chernobyl Children International (FICCI) who has been bringing children to the North West for 20 years to arrange the fun day. Emma Hunt of FICCI said the charity has been working along with CLS for several years and the annual trip to their offices is a highlight of the children’s trip. “The staff meet the kids and then they take for lunch and play some games and have a tour of the building,” she explained. “Then they go into the boardroom for sweets and drinks and they get a pile of gifts like clothes, shoes and toys. “The gifts are mixture of donations and things that have been bought using money that has been donated. “The children just can’t believe it, particularly the ones that are coming here for the first time. “There was one little girl who just couldn’t believe it was all for her and she didn’t have to share it. “There were lots of happy tears.” In addition to the fun day CLS also made a £300 donation to the charity. Ms Hunt said the generosity of the CLS staff is a great help for host families too. “We have trips laid on every week but the families entertain them too so it’s a great boost.” Computershare Loan Services CEO, Andrew Jones, said the company was delighted to help the children. “We were very happy once again to host children from Chernobyl at our office in Derry to talk to them about their experiences and discuss life in different parts of the world. “I was pleased to see so many of my colleagues donating clothes and toys for our young visitors, and impressed with the enthusiasm and creativity that the children demonstrated during the visit. “Computershare is a really international company with offices in 21 countries, and we’re always keen to take part in opportunities that help us to reach across borders and create dialogue with communities around the world.” The Foyle & Inishowen Chernobyl Children International say the time the children spend here greatly improves their health and boosts their immune system. And the charity is now asking for families who would be willing to host a child next year to come forward. "Most of these children are from very, very poor families they don't even have electricity or inside toilets," said Ms Hunt. "Many of them are orphans and are being looked after by family members who might have 10 other children.” The cost of bringing each child to Ireland for a four week stay with a host family is £1,000 for travel to the airport, flights and translator fees. The charity is also asking local businesses if they would like to sponsor a child. “Most of the children who take part in the respite programme live on produce from small allotments grown in contaminated soil, so their milk, water and food all contain radiation,” Ms Hunt explained. Their four-week stay in Ireland allows them to eat uncontaminated food and take part in field trips such as swimming and bowling. If you would like to help please contact Emma Hunt on 07775855638.
ADVERTISEMENT
Advertise with Us
ADVERTISEMENT
Advertise with Us