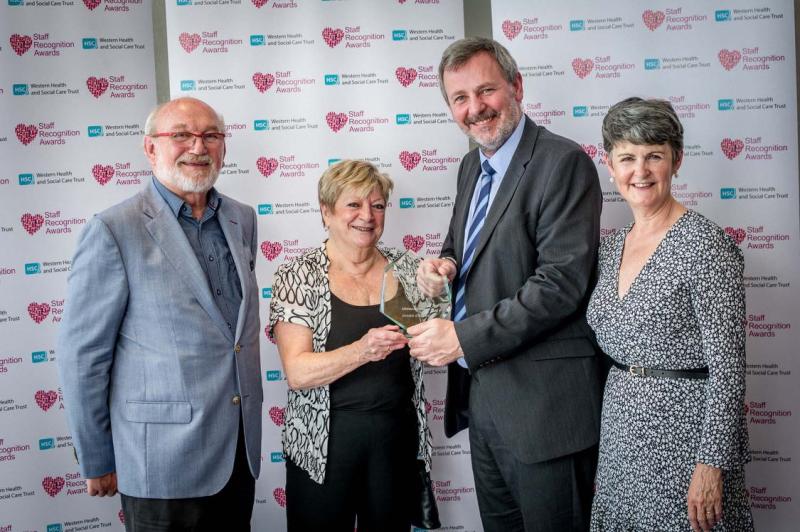 A DERRY nurse and veteran civil rights activist has been presented with a life time achievement award from the NHS. Deirdre O’Doherty was recognised for the commitment and dedication she has shown in her career which has spanned five decades. The vascular ultrasound specialist was presented with her award at a special ceremony in the Everglades Hotel by Chair of the Western Trust Niall Birthistle and Chief Executive, Dr Anne Kilgallen. Special guest, Richard Pengelly, Permanent Secretary, Department of Health, presented the awards and paid tribute to the vital role played by local health and social care staff. After qualifying as a radiographer in 1969 she began her career in Downe Hospital before venturing to Jamaica where she spent eight years. Ms O’Doherty then moved to Holland where she became fluent in Dutch and completed her post graduate qualification in ultrasound. Twenty years later she returned to the North of Ireland, working for four years in the vascular laboratory of City Hospital in Belfast. In 2003 she returned to the North West as the first vascular ultrasound specialist in the Western Trust. The move also allowed her to care for her mother Mary Ellen, who has since passed away. Both Ms O’Doherty’s parents and her twin brother Fionnbarra were frontline activists in the civil rights movement. This January, Ms O’Doherty revealed for the first time the role she played in helped to treat the wounded after the Duke Street Civil Rights march on October 5. At a 'Reflections on '68' event held at The Junction on Bishop Street, Deirdre spoke of her terrifying experiences on the day and how she ended up tending to dozens of marchers at Alnagelvin Hospital. Speaking at the event she said: "Besides other injuries to hands, arms and rib cages, after the Duke Street march I X-rayed 44 skulls - and so did my colleague". The recent awards ceremony had eight award categories for staff across all of the Trust’s services. Other life-time achievements awards were presented to Trust staff George Gilmour, Judy Houlahan, Margaret Langasco, Pat Armstrong, Collette Hegarty, and Ward 3 manager at Altnagelvin Hospital, Sister Donna Carlin. PICTURED ABOVE - Deirdre O'Doherty being presented with a Lifetime Achievement Award by by Mr. Richard Pengelly, the Permanent Secretary, Dept. of Health. Also pictured is Niall Birthistle, Acting Chairman, Western Trust and Dr Anne Kilgallen, Chief Executive, Western Trust.
ADVERTISEMENT - CONTINUE READING BELOW