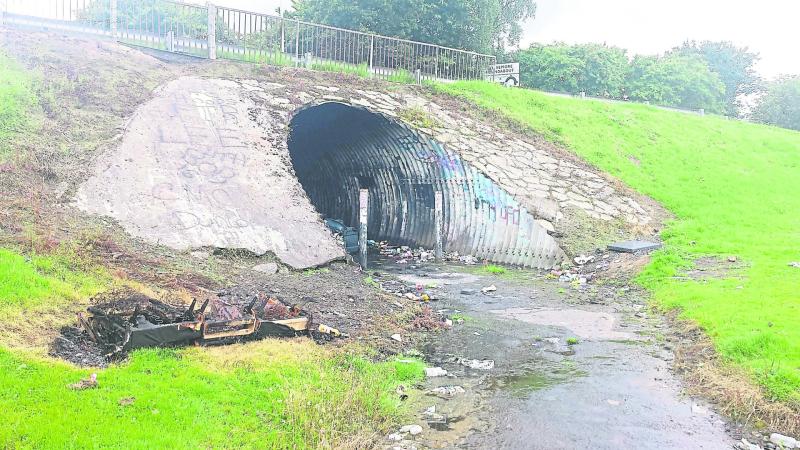 Residents of Collon Lane in Derry have called for a tunnel to be permanently blocked following a growing number of anti-social incidents brought about by youths gathering in it. The tunnel is situated adjacent to Collon Lane and goes under the Glengalliagh Road to a grass area that leads on to Moss Park/Bracken Park. The man and his partner, whose home has been affected by ongoing anti-social behaviour in the tunnel, wish to remain anonymous due to concerns about their safety and for fear of repercussions. His partner has lived at the address, which is her family home, for over forty years. There has been an issue with young people lighting fires in the tunnel for many years but the man said it has escalated recently to ‘several times a week’. Speaking to Derry News, he explained that the house is situated a matter of metres away from the tunnel meaning they can’t open windows or put clothes on their washing line because of the thick plumes of toxic smoke from burnt tyres and wheelie bins. He along with other neighbours have been forced to chain wheelie bins to their fences to prevent youths from stealing them. Those involved are both male and female and range from 11-years-old to their late teens. Events took a more sinister turn last weekend, June 24, when death threats and threats of violence were issued against the couple by several youths after they were challenged. When his children asked those responsible to ‘stop lighting fires’ they were verbally abused. And when the youths were questioned about their actions, three young girls ‘crowded around’ his partner and one ‘threatened to stab her’, he said. Five or six teenaged males who were also present became ‘very, very aggressive’ and one of them approached the woman with his fist clenched as if to punch her. Their two young children were left frightened and upset having heard and witnessed the incident. The man claimed the young people have also been engaging in entirely inappropriate behaviour in the tunnel at night, details of which he didn’t want to divulge. And his children’s sleep is being disturbed due to noise emanating from the tunnel at night. It is hoped that a solution can be found and he has personally suggested blocking the tunnel which goes unused for most of the year as it’s ‘dark and frightening and smells of urine’. “It needs to be blocked up with concrete,” he added. Instead, he proposed installing traffic lights and a zebra crossing on the road above it to allow residents to cross with ease. Northern Ireland Fire and Rescue Service (NIFRS) has consultations about removing railings at the tunnel entrance which are often ‘back-filled with materials that are set alight’. Sinn Féin Councillor Caoimhe McKnight spoke at length to the couple concerned and she is currently in talks with the neighbourhood policing team. “There has been emails back and forth between ourselves, NIFRS and the police. There is a community safety meeting this week and that will be on the agenda. “I know previously it was suggested closing it up with gates but the police don’t think it will solve the issue because there are people gathering there at various times of the day. “There was an issue if gates were installed, who would open and close them, as there are only one or two houses in the vicinity who’d be able to have the key. “But it is an ongoing issue and we have a community safety team meeting this week so we’ll be addressing the issue then and I will hopefully have more information.”
ADVERTISEMENT - CONTINUE READING BELOW