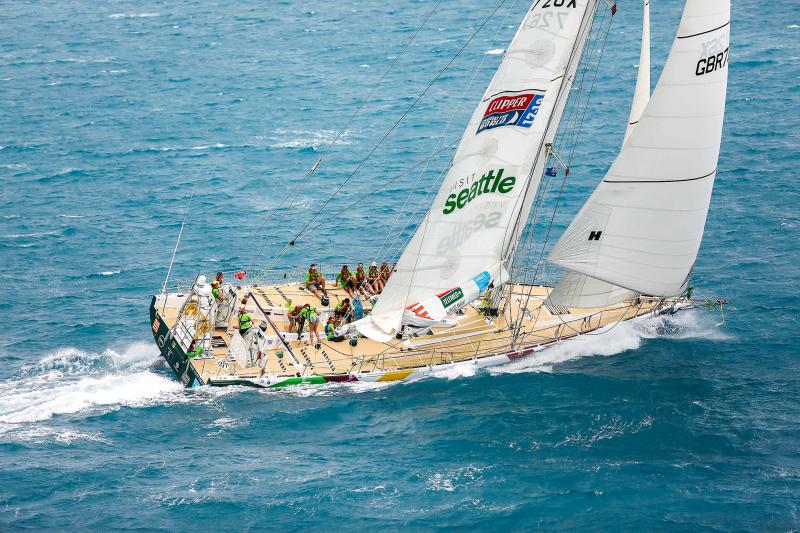 Nikki Henderson, 24, from Surrey, UK, has led her Visit Seattle team to an impressive victory in Race 12 to Derry-Londonderry, the penultimate race of the 40,000 nautical mile Clipper 2017-18 Round the World Yacht Race. Visit Seattle crossed the finish line in an area north east of the entrance to Lough Foyle at 00:21:57 UTC on Monday 9 July to complete the 3,000 nautical mile race across the Atlantic Ocean, the fast-paced sixth and final ocean crossing of the eleven-month circumnavigation, in just over 12 days. Victory in the race from New York to Derry-Londonderry has set up a thrilling duel for the overall Clipper Race Trophy against Sanya Serenity Coast Skipper, Wendy Tuck, 53 from Sydney, Australia, with the pair now vying to be the first female winner in the 22-year history of the Clipper Race. Nikki said: “I am so proud of how hard my team worked to get this win. The crew never let up over the past two weeks and really deserve this result. “We will certainly be celebrating the result in Derry-Londonderry but we all know the job isn’t done yet. The leaderboard is very close so the final race to Liverpool will be very exciting.” The Clipper Race is unique in that it trains non-professionals to be ocean faring sailors. Established in 1996 by Sir Robin Knox-Johnston, the first man to sail solo, non-stop around the world, 40 per cent of Clipper Race crew have no previous sailing experience before signing up and undergoing the compulsory four weeks of training. In total, 711 people representing 42 different nationalities and from all walks of life are taking part in the Clipper 2017-18 Race. In Leg 8, the Visit Seattle crew represent six different nationalities - Netherlands, UK, France, Germany, USA, Canada – with the ages ranging from 26 to 66. Derry-Londonderry is a much-anticipated stopover on the global Clipper Race circuit, with each of the 232 crew given a starring role in the award-winning Foyle Maritime Festival. Over the next fortnight, locals and visitors to Derry-Londonderry will be able to get up close to the 70-foot ocean racing yachts and take part in an exciting programme of diverse events in celebration of the Clipper Race crew and their adventurous spirit. The Foyle Maritime Festival will come to an end when the Clipper Race fleet departs for the final race, to Liverpool, on Sunday 22 July. The circumnavigation will come to an end at the Royal Albert Dock in Liverpool on July 28. Pictured above: The winning Visit Seattle team aboard their boat in the Clipper Race.
ADVERTISEMENT - CONTINUE READING BELOW