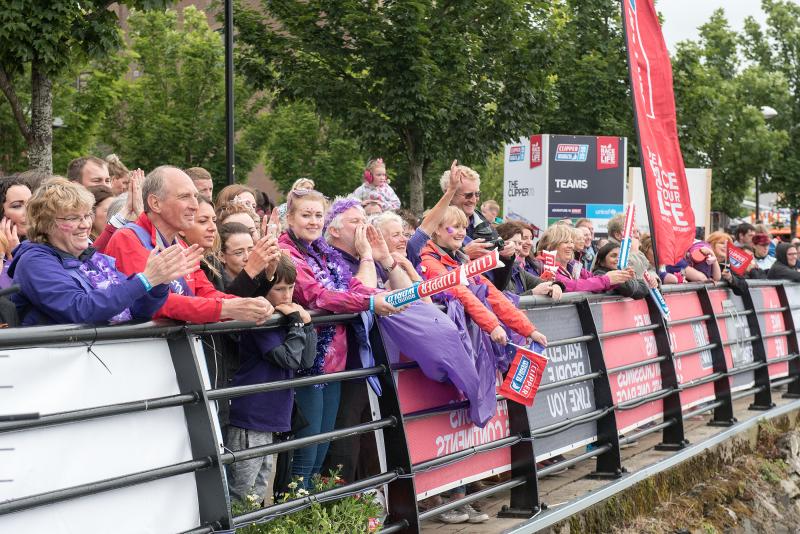 A former Derry – Londonderry Crew member has said that Derry is the Clipper stopover that everyone loves because of the city's warm welcome. Jodie Harkin looked back on the emotional day the first ever Clipper Fleet were welcomed into Derry Quay. Clipper Round the World crews know they can expect a welcome like no other when they come down the Foyle this week to complete the penultimate leg of their global adventure but back in 2012 it was a moment that took the competing yachts by complete surprise. Six years ago Jodie Harkin was already enjoying the experience of a lifetime after joining her father John and the Derry-Londonderry crew in New York for the Transatlantic leg of the trip. But the scale of the welcome she received coming into home waters in Derry took the emotion of the occasion to a whole new level. “I was blown away and it still moves me now when I think back about coming through Culmore and under the Foyle Bridge to see thousands of people lining the quay and cheering us,” she recalls. “Coming into New York, there were around 30 or 40 people watching the boats come in, that went up to 100s when we got to Halifax in Canada but it was a massive surprise for all the crews to see thousands of people lining the quay to welcome us to Derry. “I’ll never forget it, we crossed the finish line at Greencastle at around 2am on the Sunday morning and we were asked to hold off until later in the morning before making the trip into Derry. “We had to keep our mobile phones off during the race so we didn’t really have any idea of the welcome that would await us. “For me that was the highlight of the experience, no one had predicted that amount of people and it surpassed all my expectations.” Jodie will be quayside this week to welcome her lifelong friend and hotelplanner.com skipper Conall Morrison and the crew members of the 12 strong Clipper fleet to the Foyle Maritime Festival. Her own experience suggests the Clipper crews will find it hard to leave the city and complete the final leg of their journey to Liverpool in less than two weeks’ time. “In 2012 crew members fell in love with the city and its people,” she added. “They loved getting their buns and pastries from Doherty’s Bakery and they had taxi drivers giving them free tours of the town when they heard they were race crew. “It was all a bit surreal for them to have people asking for photos and handing them babies on Derry Quay but they loved every minute of it. “It’s a fantastic event, the nightlife during it is brilliant but it’s also a really family friendly event with something for everyone to do and I’m sure that will continue this year.” Having cut her sailing teeth on her father’s boat on the Swilly as a youngster, an ocean crossing was always on the bucket list for Jodie who works as a Human Resources Manager with the McCallion Group in Donegal. Dad John completed the full Round the World trip in 2012 and he is currently bringing his own boat Santana from Lagos in Portugal to Lough Foyle to be quayside for the Foyle Maritime Festival celebrations. “Growing up a transatlantic trip had always been a dream of mine so when the chance came to do it with a leg coming into my home town it was the perfect fit,” she revealed. “I went to the recruitment day in the City Hotel to get a feel for the event and decided it was a fantastic opportunity, I went through an interview process and we were observed on an outdoor pursuits day to analyse our skills in a team and I was over the moon to be selected. “Dad had always wanted to circumnavigate the globe as well and to do it along with him made it all the more special, particularly when I hadn’t seen him for 11 months. “I met friends for life on the trip and many of them will come and join us on Dad’s boat during this year’s festival. “The sailing fraternity in the North West is small, I grew up sailing with Conall Morrison and Sean McCarter so I’ve still felt a close connection with the race in recent years. “Daddy has become close friends with Clipper Crew members Roy Devine and Bill McConnell and they did part of the trip up from Lagos to Derry with him. “We are lucky that we will have a base on the water during the Maritime Festival, it could be the last time we have the boat up from Portugal so I’m going to enjoy every minute of it,” she added. The Foyle Maritime Festival returns to Derry~Londonderry from 14th – 22nd July 2018 and will host the stopover of the Clipper Race 2017-18 as they near the end of their Round the World Journey. Queens Quay will once again be transformed into a maritime wonderland full of fun, activities, music, arts and crafts as we prepare to welcome the Clipper Race yachts back. Full programme details at www.foylemaritimefestival.com. Pictured above: Thousands of supporters line Derry Quay to welcome the Clipper fleet in 2016.
ADVERTISEMENT - CONTINUE READING BELOW