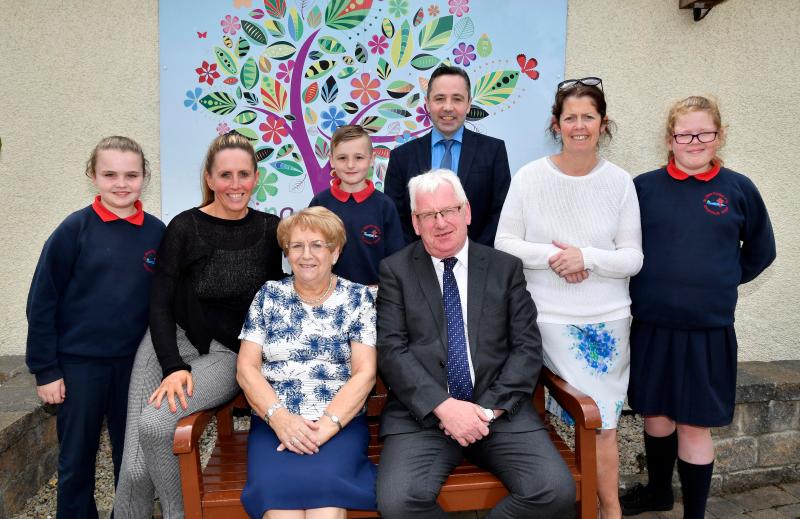 A Derry school has paid tribute to two members of staff who, between them, have dedicated almost seventy years of their lives to its pupils. Brian McLaughlin, Principal of St. Oliver Plunkett’s Primary School in Strathfoyle spent 37 years there, while secretary, Mabel White, worked there for 41 years. Both are now set to retire from the school which holds a special place in their hearts. Speaking to Derry News this week, Mr McLaughlin, who started as a teacher at the school in 1981 before becoming principal in 1989, described it as a ‘special’ place to work. A particularly cherished memory is when the first class he ever taught contacted him after twenty-five years in 2006 to take him out for a meal. “That was very nice of them, we had a great couple of years together and I really enjoyed teaching them,” he said. “My aim while teaching here and later becoming principal was to make sure every child was happy at school, in a very happy and secure environment. “And it was important to work together as a family to ensure every child was looked after.” Over the years Mr McLaughlin has made a point of knowing every child’s name at the school which is no mean feat considering there are currently 223 pupils. He believed that small, but significant gesture, made each child feel welcome and encouraged them in their endeavours. The sight that gladdens him most is seeing children he has worked alongside enjoying school. “It’s about the joy that I got out of seeing them succeed and when I hear about past pupils becoming successful now in the future. It has been an honour to be here with the children, I feel lucky to have gotten that time with them all and to have seen them grow up. “And one of the nicest things that can happen, is seeing children that I taught bringing their own children back.” His final message for the children is: “Always be yourself, never be afraid to ask and be successful.” Paying tribute to Mabel, Mr McLaughlin described her as ‘the granny to everybody in the school’ and the ‘patriarch’ to all the children and staff. “She looks after everybody, and you see the children coming in at primary one who talk to her when they’re too shy to talk to anyone else. She has so much time for the children and does all of her other work so patiently. “When they cry or cut their knee, the smaller children can usually be found sitting on her knee. She’s an excellent lady and I’d like everyone to know how good she is to the children.” Having devoted most of his life to teaching children, Mr McLaughlin looks forward to enjoying his retirement and ‘not having to think too much anymore’. In the immediate future he plans to take part in the Camino de Compostela walk in Spain in September but when he’s away the school will never be far from his mind, he said. Mrs White added that she is going to miss the staff and pupils of the school and memories she’ll carry with her will be of past pupils growing up and returning as parents with their own children over the years. “That’s one of my fondest memories, seeing pupils coming back to the school as parents with their own children. “And I would say it’s the same for Mr McLaughlin. “In my retirement I look forward to spending more time with my grandchildren.” PICTURED ABOVE - Brian McLaughlin, who retired from his post as principal after 37 years service in teaching, and Mabel White, who is retiring after 41 years as school secretary, pictured with members of the school community, from left, Ellie McElhinney, Maura Farren, Calvin Moore, Eamonn Moore, the incoming principal, Louise Hughes and Sarah Jane Hughes, who made presentations during their retirement function at St. Oliver Plunkett Primary School, Strathfoyle.
ADVERTISEMENT - CONTINUE READING BELOW