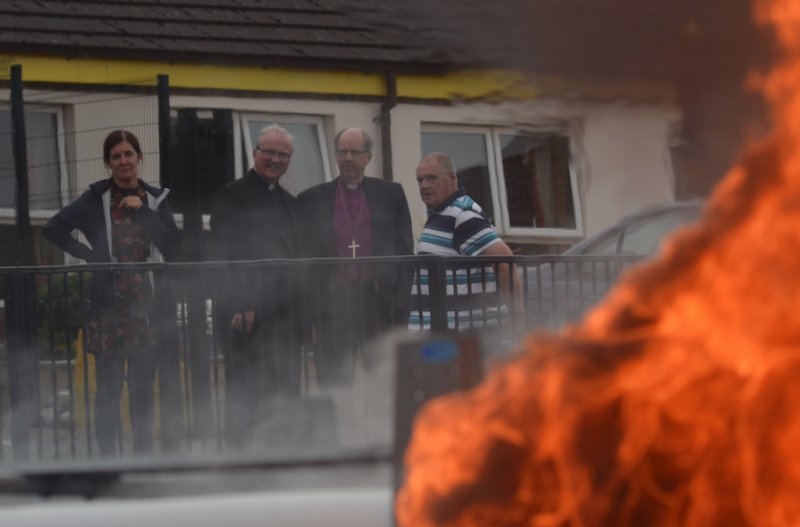 Police in Derry have said that they believe the New IRA are behind the days of violent disruption in the Bogside area of the city and if the violence continues it is only a matter of time before there is a fatality. PSNI Chief Constable George Hamilton said that the main dissident group in Derry, the New IRA, are orchestrating the unrest in the Bogside. There has now been six days of the trouble with shooting at police on Tuesday night, petrol bomb attacks on the Protestant Fountain Estate, hijackings and one incident of a petrol bomb attack on a vehicle belonging to a member of the public was caught on camera and shared on social media. Plastic bullets were also fired last night in an effort to disperse the perpetrators. At a press conference outside Strand Road Police Station, Chief Constable George Hamilton said if the current behaviour continues it is a 'matter of time' before someone loses their life . "We believe violent dissident republican groups are behind this, they will use whatever excuse they can to bring about unrest and to have young people involve themselves in violence against the police," he said. . "We believe there are members of a variety of dissident groups in this disorder - the so-called New IRA is the main group behind these murderous attacks on police. "We want to police with the community and protect people, we're working hard to maintain protecting people, locking up those responsible and bringing them before courts. "My fear is someone will be killed or seriously injured, we've already had police officers injured this week. It's only a matter of time before a police officer or a child is injured or worse. "We don't want to be fighting with anyone, we use balanced judgment when to go in and when to stay out and operational decisions are made on a routine basis," he said. "I'm not saying we always get it right but we certainly won't condone unlawfulness, we will pursue those who break the law and bring them before the courts." Defending the use of plastic bullets in the face of around 200 petrol bombs directed at police officers in the last week : "There's a long history of use of baton rounds in this jurisdiction and it is much safer now than previously," he said. "We don't want to use these against communities, we have to act in a proportionate manner, but we need full range of tactical options available to us." Pictured above: The Bishop of Derry and Raphoe, Rt Rev Ken Good, and the Bishop of Derry, Dr Donal McKeown, look on with members of the community as a blaze engulfs a van at the bottom of the flyover in the Bogside.
ADVERTISEMENT - CONTINUE READING BELOW