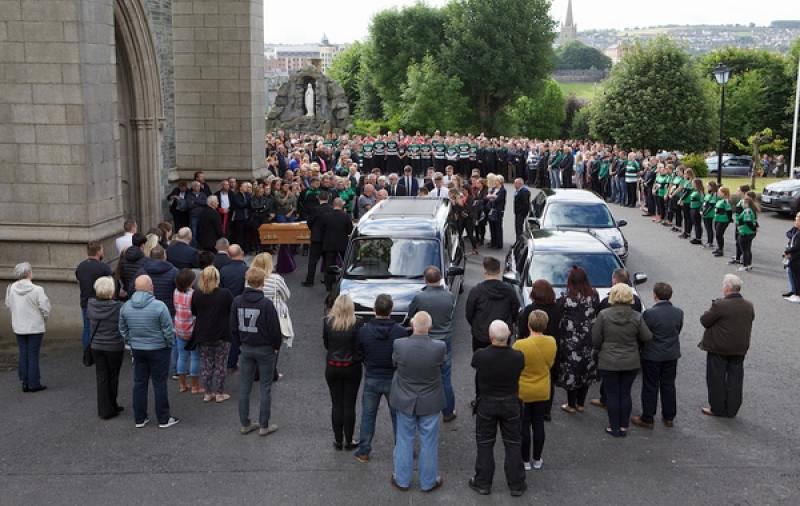 Tributes were paid to Derry hurler Aodhán O’Donnell this morning as hundreds attended his funeral, held in St Eugene’s Cathedral. The 19-year-old, who played his club hurling with Na Magha, tragically passed away last Sunday night. Breandán Quigley, who coached Aodhán at Na Magha before playing with him in the senior ranks at both club and inter-county level, said they were ‘absolutely devastated’. “He was just a brilliant young fella. You can see the pictures of him smiling. That smiling face was his trademark. He always had a big wide grin on him. He was radiant and brightened up everyone’s day. We’re absolutely devastated. “He was a great player, but he was just a nice young fella. I was lucky enough to coach him and play with him. It’s a massive loss to his family. It’s a massive loss to the team and a massive loss not just a hurler, but as a friend. It’s a credit to him the people who came out and contributed to the efforts of the last week. It’s a tribute to how loved he was.” On Sunday, his U21 Derry team-mates, wearing black armbands and led by fellow Na Magha club mate Tim Rankin, formed a guard of honour, holding aloft his number 15 jersey before their Richie McElligot All-Ireland quarter-final win over Mayo at Pairc Sean Mac Diarmada. After the game, McGurk paid tribute to the promising young forward: “Myself and Micky Glover both had Aodhán chalked down as a big player for the future – his attitude, the way he trained and looked after himself, he was a very gifted player,” McGurk said.
ADVERTISEMENT - CONTINUE READING BELOW