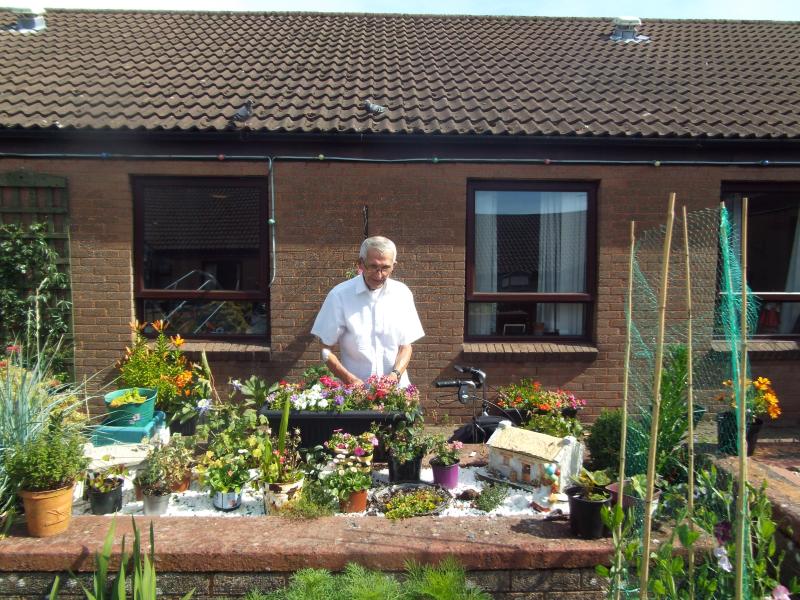 An inspirational 88-year-old pensioner has been praised for his ‘outstanding’ work in transforming the outdoor spaces at a Derry residential home. Matthew Shiels currently lives at the William Street Residential Home, where residents are now making the most of the good weather in the exquisite floral he has created in the grounds. No stranger to gardening, the green-fingered pensioner won the Kitty Hegarty Endeavour Cup in the Age Concern Annual Gardening Competition for his outstanding work in transforming the outdoor spaces in William Street Residential Home. The charity is now seeking entrants for this year’s competition, citing Matthew’s work at William Street as an example of the difference that can be made with a bit of effort and attention. Prior to his work, there was nothing in the patios at the grounds, however, Matthew’s hard work has resulted in, as he put it: “Now the ladies want to come out in their sun hats and drink tea outside, because it looks nice to have flowers.” The patios have now become the pride of the home, with visitors to the home now being urged to bring along a plant to add to the garden. When asked if he had been gardening all his life, Matthew laughed and said his first experience with gardening was helping the nuns in the good shepherd convent with weeding. He called the nun who showed him how to weed ‘Old Mother Green Fingers’ and was rewarded with fresh produce to take home and share with his family. During World War 2, he was evacuated to his grandmother’s home near Park and learned from her about planting vegetables for the family. He left school at 14 and began his career as an errand boy, which was followed a stint on the railways as a steward on the restaurant car between Derry and Belfast. Like many other men, he moved to England, living in Whitley Bay in the North East. He then moved south to London and worked in different places as a commis waiter in the Trocadero in Piccadilly and as a security Guard at the National Gallery. Matthew loved this job at the National Gallery, as he got to sit at night in a room with a million pound Michelangelo cartoon of Our Lady, St John and St Anne. The next phase of Matthew’s career saw him working for the theatre, where he started as a backstage hand in the Royal Shakespeare Company. He then moved into the wardrobe department and the wig department creating bald heads and moustaches for the likes of Laurence Olivier, “before he became a sir”, Matthew added. Matthew also worked with Timothy West and Prunella Scales whom he describes as ‘lovely people’, and the likes of Glenda Jackson and Penelope Keith before they went onto work in television and film. With the onset of the Thatcher years, funding cuts to the arts saw Matthew move on to becoming a chief steward on a gas exploration rig in the North Sea. It was a totally new way of life, but one that he embraced – but he never got used to the helicopters. “You fly above water and see something below that looks like a halfpenny in the sea, and as you drop down it gets bigger and bigger until you land on the helipad,” he joked. Despite the harsh environment, Matthew began trying his hand at growing tomatoes on the rig. “The plants started to grow but no fruit, but sure it was worth the try,” he said. A vacancy led to Matthew joining first supply ships which enabled him to travel round Scandinavia and northern Europe and later to working on ships undergoing sea trials. Although Matthew never planned his career, he enjoyed every job that he ever did. When he had time and money to spare, he also enjoyed travelling the world to places like Morocco and his favourite country, Italy. Which brings us to the current day, in William Street, where Matthew is looking at a pewter mug that he received from his first commissioned rig the Endeavour. “Every crew member received one of these to mark its maiden voyage,” he said. “That’s what I thought of when I got the cup for Endeavour in September 2017.” He also had a tip for other gardeners – donkey droppings. “They’re good for roses,” he added. Matthew is also a firm believer in making use of everything, such as the remnants of a bicycle which his nephew brought to the home for him, and he duly transformed it into a garden feature. A spokesperson for Age Concern said that Matthew’s story ‘beautifully the link between gardening, well-being and challenge’. “Matthew was awarded the Endeavour Cup because he made and continues to make a difference to the residents, staff and visitors of William Street Residential Home,” the spokesperson said. “If you know someone like Matthew making a difference get an entry form and help spread the passion for flowers and vegetables.” All gardeners must be 60 years young or older to participate, and the closing date for entries is Friday, July 20. For information and entry forms, contact Older People North West/Age Concern Derry: 028 71 347 478 or email: development @olderpeoplenorthwest.org.
ADVERTISEMENT - CONTINUE READING BELOW