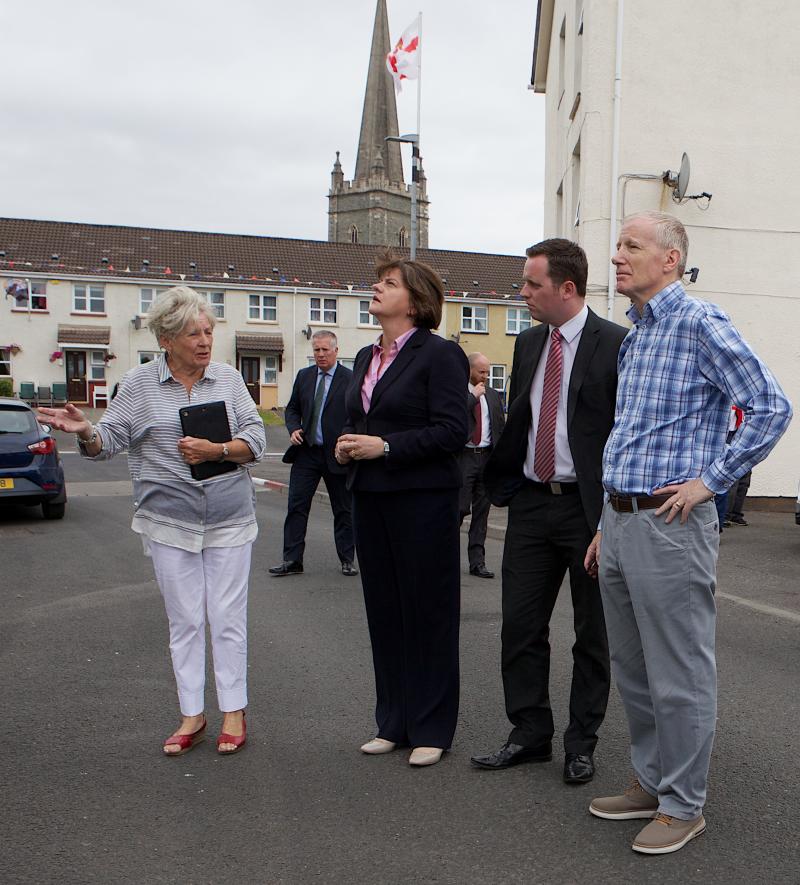 Residents of the Fountain in Derry whose homes have been attacked over recent weeks have pressed DUP leader Arlene Foster to higher the interface fence on Bishop Street to protect them from repeat incidents. The issue was raised on Saturday when Mrs Foster visited homes on the frontline which have been pelted with missiles in the past. One lady expressed concern about her oil tank which is positioned at the front of her home and therefore directly in the line of fire and the Unionist leader said she will voice their concerns to the Northern Ireland Office (NIO) and Department of Justice. “I wanted to come to stand in solidarity with those living in the Fountain but with everybody in the city, to say to them, those law-abiding people who live here in the city have to be allowed to live in peace here. "This is a beautiful city and I’ve always had a strong attachment to this city from my time as tourism minister and I really want to see it flourish into the future and those people who want to drag us back, they have to get a very clear message that they will not be allowed to do so. “They’ve talked about how fearful they were for their homes and indeed their lives and I’ve been able to see what has been happening, the scorch marks were there. They very clearly want to have the fence at a higher level and I will be taking that back to the NIO and Department of Justice.” She did however praise the actions of police and ‘great restraint’ shown by young people in the Fountain area who she said have not retaliated in any way over the past couple of weeks. “I was listening to the residents telling me that they were very pleased by the actions of the police service here over the past seven days. I’m now going down to meet some police officers who’ve been involved over this past seven days. “I think they have shown great restraint in not responding and a lot of good work has gone on in relation to that, I particularly want to commend Jeanette Warke and the work that she has does with the Cathedral Youth Club and I want to say the young men themselves have shown incredible restraint and I want to say to them today, ‘well done’, because that’s exactly what you should do. “The police of course have to react to what is happening, they have to protect the law-abiding people who live here in the city and I think they’ve been doing that very well. "Of course we want to see prosecutions and those who are behind what is going on brought to justice and we will be supporting them to do that.”
ADVERTISEMENT - CONTINUE READING BELOW