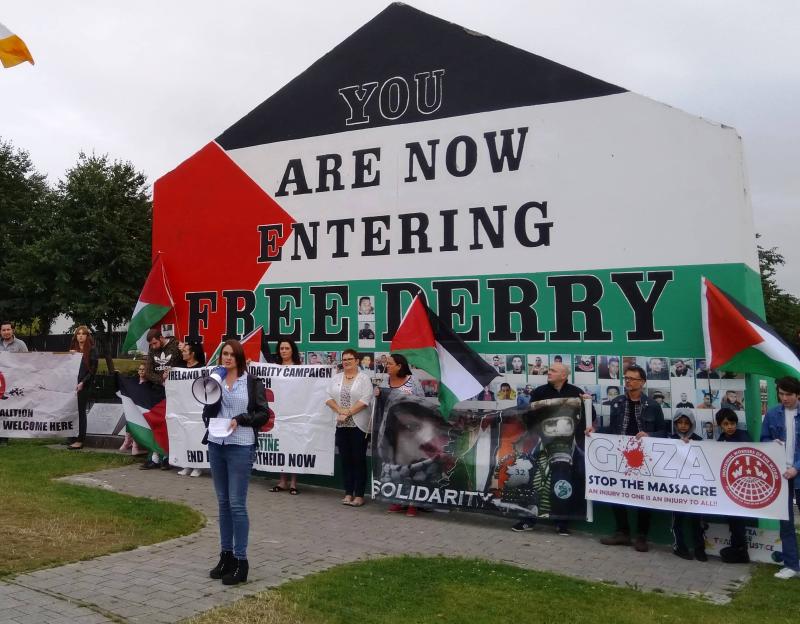 Sinn Féin Councillor Caoimhe McKnight has called on the international community to take immediate action to bring an end to the war against the Palestinian people. The call comes after two more Palestinians were killed by Israeli airstrikes over the weekend in the Gaza Strip. Speaking at an emergency rally last night at Free Derry Wall organised by the local branch of the IPCSC, Caoimhe McKnight said: "I condemn the brutal and violent actions of the Israeli forces who have killed two more Palestinians by airstrikes over the weekend in Gaza. “Over 130 Palestinians have been murdered by Israeli forces since March 2018. This is a massacre and would not be accepted anywhere else in the world. “But the international community remain silent. The routine statements of ‘concern’ must translate into sanction. Israeli cannot be allowed to act with impunity for committing state murder. “The Irish government must take the lead and send the Israeli ambassador home and immediately recognise the State of Palestine as approved by the Dáil over four years ago. “The passing of the Occupied Territories Bill in the Seanad is a momentous step towards banning the import and sale of goods, services and natural resources which come from Israeli settlements. “Sinn Féin will continue to argue for justice, rights and peace in Palestine and make our voice heard against the abuse of International Law which damages the two-state solution.” Pictured above: Cllr Caoimhe McKnight speaking at the the rally held at Free Derry Corner last night.
ADVERTISEMENT - CONTINUE READING BELOW