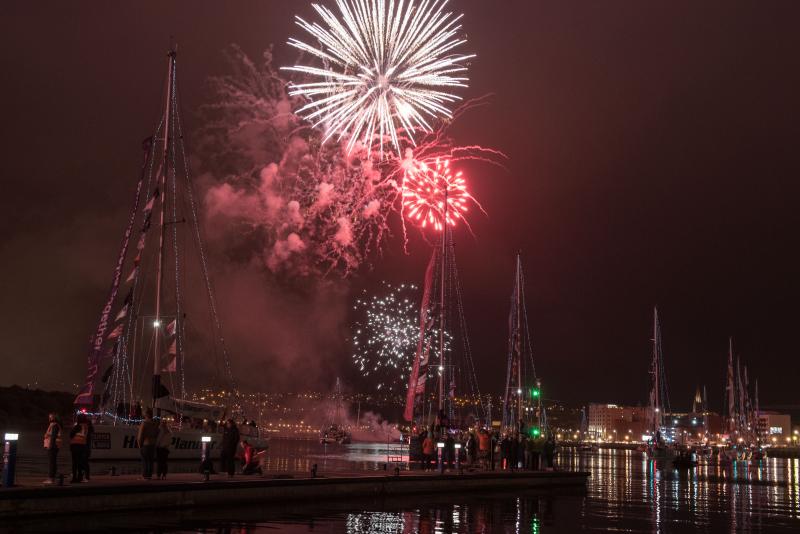 Tens of thousands of people lined Derry’s quayside last night to watch the Foyle Maritime Festival’s highly anticipated ‘Voyages’ showpiece. The performance on and along the river featured illuminations, animation and aerial performances and climaxed with an explosive fireworks finale from two points on the water. The showcase was the highlight of the week long festival which ends this Sunday when the Clipper Round the World Yacht race fleet leaves the city’s quayside to start the final leg of its global journey. Record crowds have attended the event to sample the family entertainment and activities along the Foyle and view the visiting vessels and the Clipper fleet who have been docked in the city’s Marina since completing their Atlantic crossing last week. Mayor of Derry City and Strabane District Council, Councillor John Boyle, hailed everyone involved in taking the celebrations to ‘a new level’ last night. “There has been a packed programme of events all week and it has been fantastic to see so many local people and visitors to our city out enjoying the festivities,” he said. “Last night’s event took the celebrations to a new level with the captivating parade of light on the Foyle preceding the stunning fireworks display. “I would like to congratulate Council’s Festival and Events Team on pulling off yet another night to remember and all the statutory agencies who worked so well together to manage and event of this scale.” The cast for Friday’s entertainment came from the North West’s finest arts programmers including Echo Echo, Fidget Feet, Glasgowbury Samba, In Your Space, NW Carnival, Sollus Cultural Promotions, Studio 2, CCÉ Baile na gCailleach, Cholmcille Pipe Band, Eden Place Arts and Zero Waste. The Foyle Maritime Festival continues over the weekend, the full programme is available at www.foylemaritime.com and if you’re travelling to the festival check out www.translink.co.uk/foylemaritimefestival/ The Foyle Maritime Festival is brought to you by Derry City and Strabane District Council with the support of Tourism Northern Ireland, Foyle Port, Loughs Agency, DuPont Kevlar, Diageo, NW Regional College and Translink. [embed]https://youtu.be/16_1xwenmNQ[/embed]
ADVERTISEMENT - CONTINUE READING BELOW