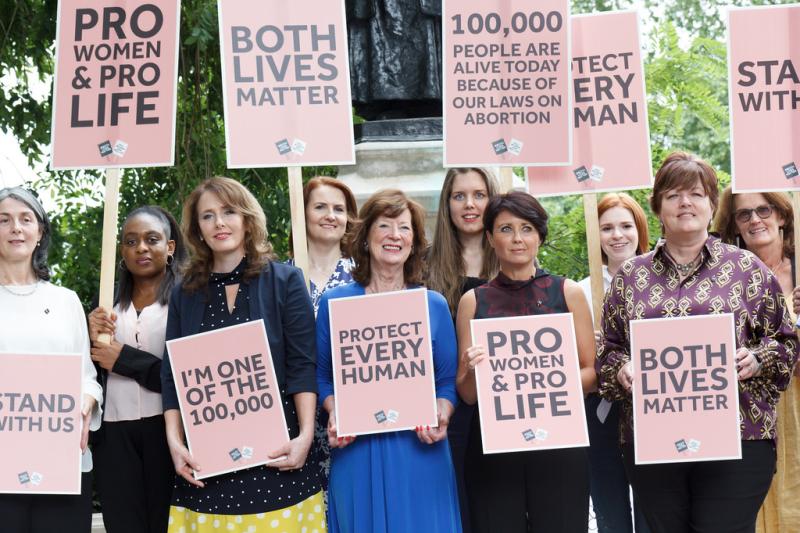 By Eamon Sweeney A former Co Derry Sinn fein Councillor has warned that any attempt by the British Government to overhaul current abortion legislation in Northern Ireland in the absence of a Stormont administration could damage the changes of a return of devolution. Ex-Mayor of Limvady Anne Brolly last week addressed a group of MPs at Westminster on the issue of retaining the current law in Northern Ireland with regards to abortion. Amongst the messages delivered at the House of Commons was that changing the law here could damage the return of devolution to Stormont. The delegation comprised of seven people that traversed the political spectrum here, with the DUP MLA for Upper Bann, Carla Lockhart also speaking at the event. Speaking at the gathering at the Houses of Parliament Anne Brolly opened her comments by saying: “I am an Irish republican. It is safe to say that speaking at Westminster has not been one of my life’s ambitions, but this is issue is so important to me that I had to come here today. “The abortion stories I have heard reinforces my belief that abortion leads to a lifetime of grief. “Women never regret keeping their baby. They profoundly regret abortion.” The UK’s Supreme Court has ruled that abortion laws in Northern Ireland are in contravention of human rights. As a result it has seen calls pressurising the current British Government into imposing abortion legislation in line with the rest of the UK in the ongoing absence of a devolved assembly. However, Theresa May has resisted the calls and insists that any change in the law must be a decision for a reinstated Stormont. At the moment in Northern Ireland, it is a criminal offence for a pregnant woman to have an abortion and for medics to assist her unless there is a risk to her life or there is a risk to permanent or serious danger to her mental or physical health. Pro-choice campaigners in Northern Ireland have honed in on the results of the Republic’s referendum in May which saw people decide to overturn the abortion ban there by a margin 66.4% to 33.6%. They say the same change needs to be carried through north of the border. Mrs Brolly and her husband Francie Brolly, a former Sinn Fein MLA quit the party last year because of the change in their policy towards abortion. Anne Brolly continued: “My object is to keep abortion out of my part of Ireland. “The devolved administration in the north of Ireland was hard won ans is currently very fragile. “I am proud to be here with my fellow Catholic, Protestant, dissenter and other citizens to assert the right to life of our pre-birth babies.” Theobald Wolfe Tone, the father of Irish Republicanism, founded the United Irishmen in Belfast in 1971 on the core republican principles of freedom, equality and fraternity.” “If MPs are serious about respecting it then they will not legislate above the heads of our elected representatives. “All across the north there are many women, of different political persuasions, who do not want this sort of imposition and I would strongly urge MPs to listen to the views expressed. Last Friday, the Republic’s High Court refused permission to two people seeking to challenge the result of the referendum on the Eighth Amendment of the Irish Constitution-which contained the ban on abortion. Both Lives Matter is a Northern Ireland wide pro-life group. It’s aims are it says to “re-frame the abortion debate in Northern Ireland and beyond, to advocate for better care in pregnancy crisis, to create a life-affirming culture that values each woman and her unborn child and to safe-guard the current law which protects both women and children.” Co-founder of the organisation, Dawn McAvoy said: “We would urge British MPs to respect the people of Northern Ireland and our elected representatives. “Our current law provides proper protection for both the mother and unborn baby and we’ve found that many women have no desire for that law to be changed.” In January last year Both Lives Matter launched a billboard campaign claiming that 100,000 people in Northern Ireland were alive because of the nature of the current abortion laws here. The Advertising Standards Agency (ASA) received 14 complaints about the claim contained in the advertisement. However, the complaints were dismissed by the ASA on the grounds that the figure of 100,000 was an estimate and said evidence indicated there was a reasonable probability that the figure was correct considering thaty Northern Ireland had been excluded from the 1967 Abotion Act in the UK. DUP MLA Carla Lockhart said at Westminster: “I have constituents who are deeply concerned at the prospect of abotion on demand being foisted on Northern Ireland. “We urge members of both Houses about abortion as well as the role of the Northern ireland Assembly. “Abortion was fully devolved to the Assembly in 2009. Any more to liberalise our abortion laws through Westminster would be unreasonable and disrespectful to the democratic process in Northern Ireland. Such significant change would undermine the principle of devolution. “It would be short-sighted and foolish in the extreme to take advantage of the current political complexities at Stormont to impose such controversial legislation over our heads.”
ADVERTISEMENT - CONTINUE READING BELOW