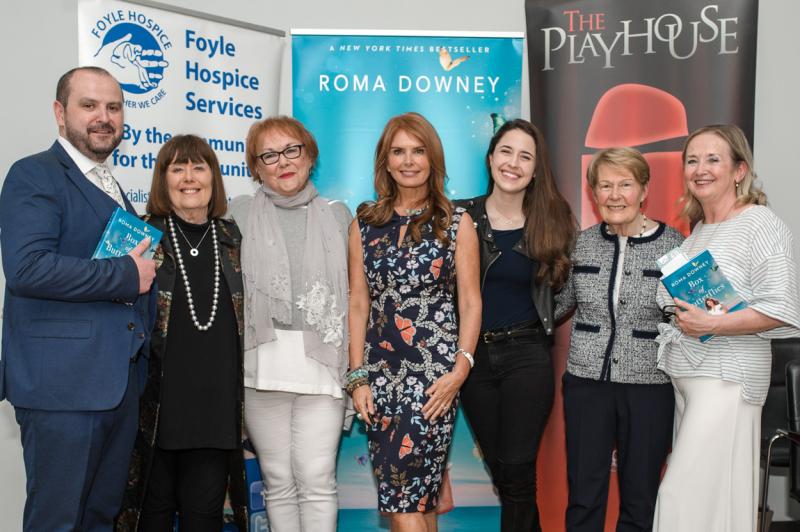 Derry-born actress Roma Downey has become an official patron for local charity Foyle Hospice. The local born actress, producer and author is now based in Los Angeles and best known for her Emmy and Golden Globe nominated role as Monica in the CBS series "Touched by an Angel". Last month, along with her daughter Reilly, Roma took some time during her vacation to visit patients and families, as well as staff and volunteers at the Culmore Road facility.  She was clearly moved during her visit but welcomed the opportunity to engage with those people who are living with illness, supported by their families and carers, as well as staff and volunteers at Foyle Hospice. Speaking after her visit Roma said, “I played an angel on television, but they are all the real angels at the Foyle Hospice. I was so impressed by everyone I met at my recent visit there and touched by the meaningful service they provide within the community.  I saw only  the best level of care for patients and the most  loving support for families .I am proud to be able to step up as patron“. Roma joins local actress Bronagh Gallagher as joint patron for one of the city's best known and highly respected charitable organisations, which has been providing hospice and palliative care to patients with life limiting illnesses since 1985.  The need for hospice and palliative care services continues to rise and supports patients with life limiting illnesses including Cancer, Motor Neurone Disease, COPD and Parkinson's Disease.  Whilst partially funded by the Health and Social Care Board, Foyle Hospice relies on the local community for approximately 70% of its total running costs. Foyle Hospice Chief Executive, Donall Henderson said of their new patron, "We are absolutely thrilled and very honoured to have both Roma accept our recent invitation to become an official patron.  This is a very important endorsement of the work that our staff and volunteers continue to do, in order to make sure that we provide a high quality standard of care and support”. He added, “Roma has been so supportive of Foyle Hospice and we wanted to recognise that relationship.  We are very privileged that both she and Bronagh Gallagher take time from their busy schedules to help raise awareness and encourage others to support us in our work”. Roma has provided a limited number of signed copies of her book “Box of Butterflies” which are on sale via the Foyle Hospice website.
ADVERTISEMENT - CONTINUE READING BELOW