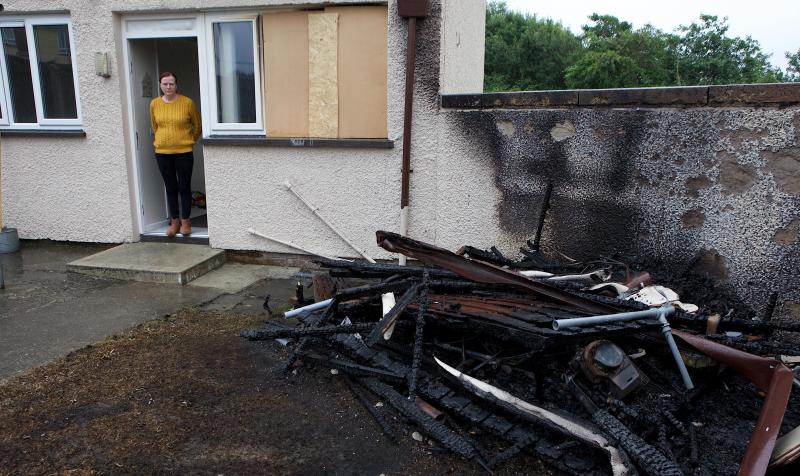 A ‘senseless’ arson attack on a home in the Carnhill area of Derry could have resulted in the death of a three-year-old child over the weekend. Jacqueline Holden, whose home was attacked, has lived in her family home for 47 years during which time neither her or her parents have ever been subjected to an act of such wanton vandalism. The attack took place around 9pm on Thursday last when she was at home looking after her three-year-old granddaughter and teenage daughter. Thankfully, a vigilant neighbour sounded the alarm and came to their rescue after noticing the flames at the rear of the property. Describing the incident, Ms Holden said: “I was actually lifting the wain off the sofa to take her up to bed and I was on the first stair when my neighbour came flying through my living room. I didn’t even know the back of the house was on fire until she came running in and shouted, ‘get out, get out, the whole back of the house is on fire!’ “My shed was burnt and the windows in my kitchen and bathroom all have to be replaced, and my back door because the PVC has melted. “The Housing Executive came out boarded up my windows and came again the next morning to put up piping for the bathroom, but it’s only temporary. “The police sat outside the house all night until the forensic team came - they’re still investigating to find out who did it. “I haven’t slept the whole night long.” Ms Holden has shown remarkable resilience and, as it’s the home she has lived in since she was eight-years-old, she said she could never envisage herself moving despite what happened. “I’ve been living in this house since I was eight years of age and I’m now 55, it was my mammy and daddy’s home. I haven’t been able to sleep since it happened, and the wee girl was terrified, she wouldn’t even go to her bed last night. “It’s while scary, I’ve never experienced anything like it in my life. But I would never leave this house because it was my mammy and daddy’s and I was reared here.” It was a senseless act of violence which has left Ms Holden questioning why anyone would want to target her home. She said: ‘I don’t know what way to think, there’s absolutely no reason for it, it’s only me and my husband and the wee girl that lives here.' Independent Councillor for the area, Warren Robinson, described it as a ‘shocking’ attack in which ‘a lot of damage was caused’. He said he believed the incident fed into a pattern of behaviour in which youths have been setting fire to fences and other property which has been affecting residents around the Carnhill/Collon Lane area. However, he stressed on this occasion it was ‘far more severe’ and could have led to fatalities. He added: “I would just appeal to anybody involved to really think about the consequences of what they’re doing because somebody really could have been killed in this incident. There was a three-year-old child in that house and it’s unthinkable what could’ve happened. “If the child had been in bed it could’ve been overcome with smoke. They need to think of the consequences and I wouldn’t want young people who aren’t thinking about their actions to end up with something more serious on the conscience. They need to think about what they’re doing and desist immediately.” “This was far more severe, the windows and the drainpipes have to be replaced in the house. In the next garden the gas runs into the house along the gable which wasn’t too far away and on the other side of their garden there’s an oil tank, and if either of those had caught fire the consequences could have been awful. “We’ve seen it before with oil tanks and if one of them goes on fire it could burn down a whole street. Lighting fires in someone’s back yard is not on and the community would reject that sort of behaviour.” Pictured above: Ms Holden surveys some of the damage caused to her home by the fire.
ADVERTISEMENT - CONTINUE READING BELOW