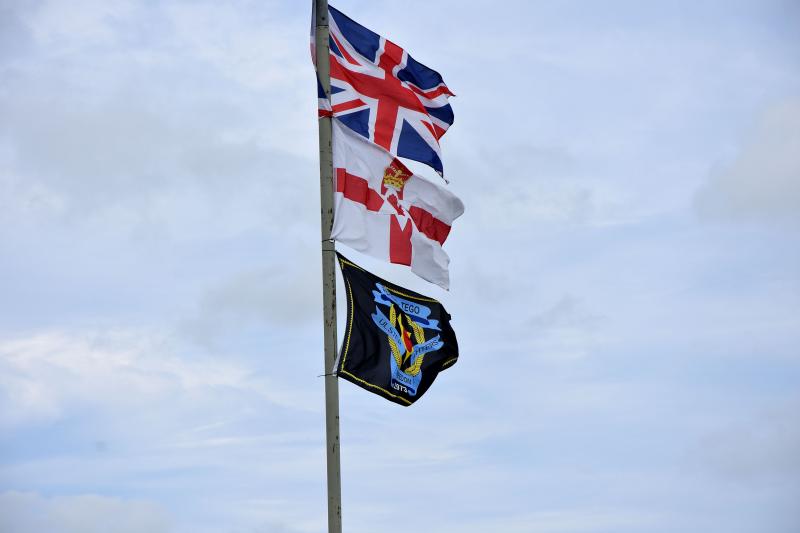 An East Derry MLA has laid the blame for the appearance of large numbers of loyalist flags and the daubing of kerbstones and road markings in areas of Limavady on the continuing absence of Stormont. In recent days, swathes of flags have been placed in the Edenmore Road area of the town. And, the approach road to the Roe Valley Hospital has seen traffic bollards and islands, kerbstones, road markings and the tops of walls at residential properties painted red, white and blue. Also, Ulster Freedom Fighter (UFF) Ulster Defence Association (UDA) and Parachute Regiment flags are being flown in those areas. The approach to Scroggy Road in the East Derry town have also seen an increase in similar activity. The UFF, the paramilitary wing of the Ulster Defence Association were responsible for more than 400 murders during the Troubles. SDLP MLA, John Dallat who has in the past been targeted by loyalist organisations, told the County Derry Post: “Concerted efforts to introduce the law of the jungle cannot continue much to the disgust of ordinary decent Protestants and Catholics and those of different faiths and no faith at all who want the ugly image of division removed from their kerbstones, roundabouts and lamp posts.” Mr Dallat also said that his constituency office has been “inundated” with complaints “from all sections of the community” on the issue.” Brenda Chivers, a Sinn Fein representative for the area told the County Derry Post: “On the back of concerns from residents I have called a multi-agency meeting to try and curb the heightened tensions that have been caused by the increase in the number of flags and painted kerbstones in the area.” The County Derry Post understands that the meeting is due to take place later today. And, John Dallat continued: “People are very angry that their neighbours are being ‘ghettoised’ by an unrepresentative few who want to promote sectarianism and division where it doesn’t exist. “Limavady is a good shopping town, its people are among the best in the world and they deserve better than the sectarian image portrayed by faceless people who have no respect for themselves, their neighbours, public property or those who have invested their life-savings in businesses where they need new customers rather than having those who currently visit the town being put off. “The failure to restore the Lisnakilly Roundabout after it was painted red, white and blue in April marked a point where these faceless people felt they are the God-given right to desecrate other parts of the town. “I have no doubt that this outbreak of lawlessness is also linked to the absence of an assembly which has created a vacuum that evil people want to fill through paramilitary activity. “All political parties should be working together for the common good of all our people. There should be no ‘ifs’ or ‘buts’ about this kind of behaviour and we need to embrace the wider community and that includes the business community who have much to lose if this nonsense isn’t dealt with as it should. “There is particular anger this year that there has been a concerted effort to extend the boundaries of sectarian painting and flying of illegal flags. It hasn’t been stopped and it must because that is the wish of the people – all the people. “Marking out territory imposes a blight on the whole community, it impacts on the value of property, dissuades shoppers and most certainly puts off potential investors. The lesson to be learned from this is for action to be taken immediately and those involved prosecuted for criminal damage, breaches of the Hate Laws and a determination that it will not happen.” Meanwhile, Chief Inspector Ian Magee told the County Derry Post: "The PSNI fully understands that the flying of flags can cause frustration in some communities. “It is our experience that such issues are most successfully resolved through engagement and collaborative working between local communities and their representatives and police are always ready and willing to be a partner in such arrangements. "We know that there is ongoing work to update the previous 'Joint Protocol in Relation to the Display of Flags in Public Areas' and we look forward to that work concluding. In the meantime, PSNI will continue to judge each case on its merits, mindful of the proven record of community resolution and our duties to protect people and their property when there are substantial risks to public safety."
ADVERTISEMENT - CONTINUE READING BELOW