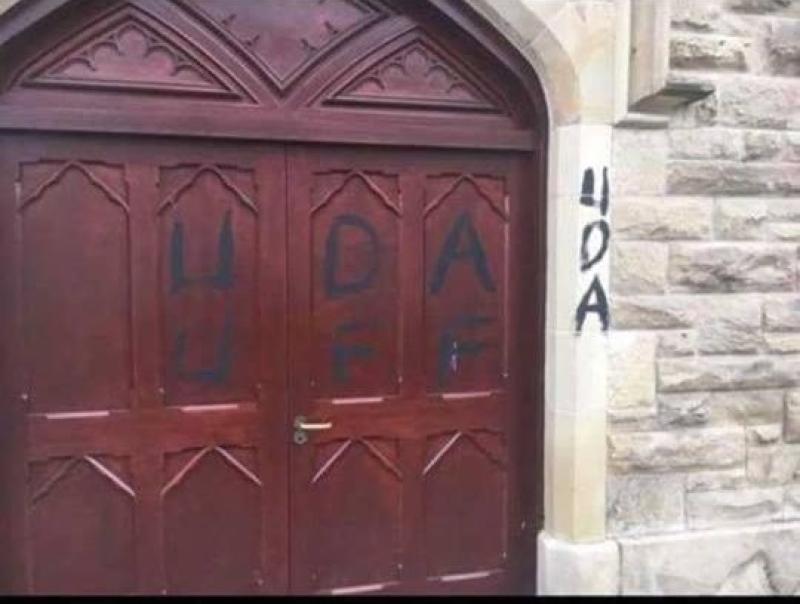 Police are treating an incident of graffiti being painted on the doors of a Catholic church in Limavady as a sectarian hate crime. A crucifix was also damaged in the incident at St Mary’s Church which is located at Irish Green Street. The PSNI in the East Derry town say they received reports of the incident at around 8.35am this morning (July, 31). A statement from the police said: “The incident is being treated as a sectarian hate crime, and I would appeal to anyone who has any information about the incident, or who saw any suspicious activity in the area to contact officers in Limavady on 101 quoting reference number 275 of 31/07/18.” The incident at St Mary’s Church comes days after an upsurge in the placement of loyalist paramilitary flags and the painting of kerb stones, road markings, traffic islands and bollards in red, white and blue colours. SDLP MLA for the constituency John Dallat, told the County Derry Post: “Limavady is a good shopping town; its people are amongst the best in the world and they deserve better than the sectarian image being portrayed by faceless people who have no respect for themselves, their neighbours or public property.” It is understood that a multi-agency meeting aimed at decreasing tensions caused by the recent activity is due to take place in Limavady today. With regard to the overall situation Limavady, PSNI Chief Inspector Ian Magee told the County Derry Post: "The PSNI fully understands that the flying of flags can cause frustration in some communities. It is our experience that such issues are most successfully resolved through engagement and collaborative working between local communities and their representatives and police are always ready and willing to be a partner in such arrangements. "We know that there is ongoing work to update the previous 'Joint Protocol in Relation to the Display of Flags in Public Areas' and we look forward to that work concluding. In the meantime, PSNI will continue to judge each case on its merits, mindful of the proven record of community resolution and our duties to protect people and their property when there are substantial risks to public safety." In a separate incident also in the early hours of this morning two cars were set on fire at the campus of North West Regional College at Greystone Road in Limavady. Police have also appealed for information on that attack.
ADVERTISEMENT - CONTINUE READING BELOW