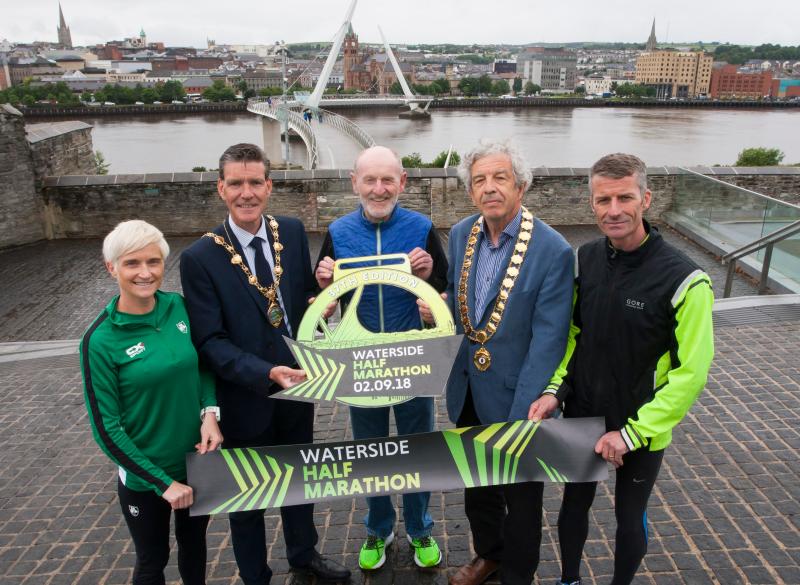 The 2018 Waterside Half Marathon is set to be the biggest and most prestigious in its 37 year history when up to 2,500 runners descend on Ebrington Square for race start on Sunday September 2 nd. Event organisers Derry City and Strabane District Council and City of Derry Spartans have announced this week that the race will act as a qualifier for the NI squad for the inaugural Commonwealth Half Marathon Championships on Sunday October 7 th in Cardiff. The race has already been confirmed as the host event for the NI and Ulster Half Marathon Championships which has swelled demand for places as Race Director Gerry Lynch explained: “We have received over 1300 individual entries to date as well as 40 plus relay teams of three which is a big increase on last year and indicates that the individual limit will be reached soon,” he revealed. “The NI and Ulster Half Marathon Championships and qualification for the Commonwealth Championships is a big carrot for the top male and female entrants to aim for and this should add to the quality of the field and the up front competition on the day. “The event sells out every year and with the continued growth of athletics and running clubs locally our advice to anyone intending to take part is to register online now to avoid disappointment when entries close on August 13 th.” The Waterside Half Marathon is one of the longest running athletics events in Ireland with a scenic route that takes in both sides of the River Foyle, passing many of the city’s historic landmarks including its famous walls and the Guildhall. The 13.1 mile course has runner, wheelchair and three person relay categories, the event is open to athletes of all levels and abilities and all entrants to the main race must be aged 17 or over on race day. A number of groups have already registered for the event to raise funds for their chosen charities including a group of over 20 runners from Firstsource Solutions in Derry who are taking part in aid of Foyle Search and Rescue. The event includes a team of 12 pacers who will be identifiable at the race start by helium balloons displaying their times. Pacer times start at 1 hour and 30 minutes and rise in increments of 15 minutes up to 2 hours and 30 minutes. “The pacers are all experienced runners who have studied the terrain of the course beforehand and they have always been spot on with their timings,” Gerry explained. “The beauty of having different pacers is that if peoples’ goals change during the race they have the option to slow down or speed up to join the pacers behind or in front. “Pacers will be walking around the start line for half an hour before the race and will be identifiable by helium balloons and t shirts showing their time so runners can file in behind them at the race start.” “It’s a spectator friendly route with the start and finish at St Columb’s Park and people can stand anywhere along the river bank on the west bank and enjoy the action. “Between the Peace Bridge and Coshowen runners will be running in both directions so that is a particularly good place to enjoy the action.” All participants will receive a specially commissioned Waterside Half Marathon medal and race t shirt. Entries to the race close at midnight on Monday 13 th August 2018 and you can register online now at  http://www.derrystrabane.com/whm.
ADVERTISEMENT - CONTINUE READING BELOW