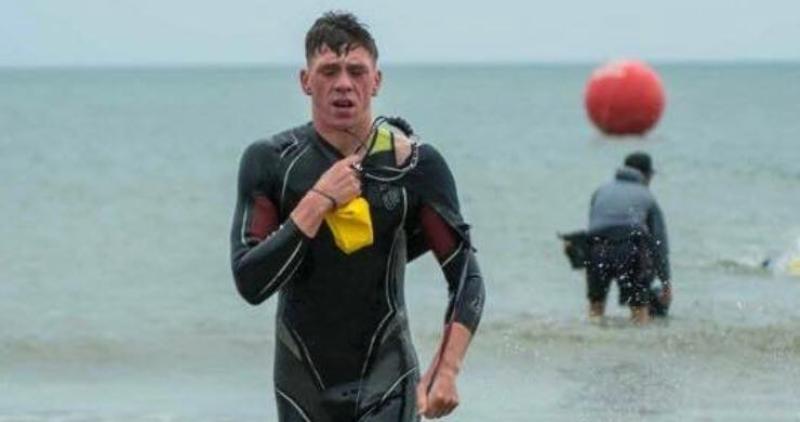 A 19-year-old Derry triathlete and lifeguard is being hailed a hero after he jumped into the River Foyle on Thursday evening in an attempt to save a person in distress and administered First Aid. Odhran McKane, who is a lifeguard at Templemore Sports Complex, entered the water on Thursday evening to help a person in distress. He got them back to the water's edge where he performed CPR until the emergency services took over. Sadly, the person involved passed away today. Foyle Search and Rescue commended young Odhran saying: 'Special recognition to the person who entered the water and those who administered bystander CPR on shore prior to the arrival of the emergency services.' There has been an outpouring of praise, admiration and gratitude for the young man on social media. Aidan Nelis wrote: 'I think it's very important to note that the young fella showed maturity beyond his years by setting up safety measures for himself before entering the water. His calculated approach and elite ability to swim ensured there was not two people in trouble. Bravery beyond belief, well done young man.' Andrew McCartney, called Odhran a 'hero' and spoke of his pride in his own son's role in helping out: 'My son Shane was one of those at the scene and helped out. As parents we are so proud of him. For the young man who entered the water he is a hero. Thoughts and prayers with the man and his family.' Liam Wilson responded: 'The guy who entered the water is an elite athlete and one of the city's best swimmers. He couldn't have been in a better place at a better time. Well done to your son for helping out. Such a selfless act to risk his own life.' Eyewitnesses said Odhran at first tried to throw lifebelts to the person in the water but when they were of no help, he dived into the Foyle towards the drowning person. After getting the casualty ashore, he performed CPR and stayed with him until the ambulance and Foyle Search and Rescue arrived. Sadly, Odhran's grandmother, Anne McKane, 78, passed away a short time after the incident and he did not wish to speak to the press. His father, Joe, however, said he was 'so proud' of his son and said that the family were experiencing mixed emotions given his son's heroic act and the sad family bereavement. Odhran is a member of the Irish national elite triathlon panel, a former member of the Derry county GAA underage development panel and also played for Sean Dolans and Steelstown Brian Ógs GAA clubs. Pictured above: Local 'hero', Odhran McKane.
ADVERTISEMENT - CONTINUE READING BELOW