Tubs is coming to town! RTE star is Donegal bound for live show from the ‘Wild Atlantic Way’ 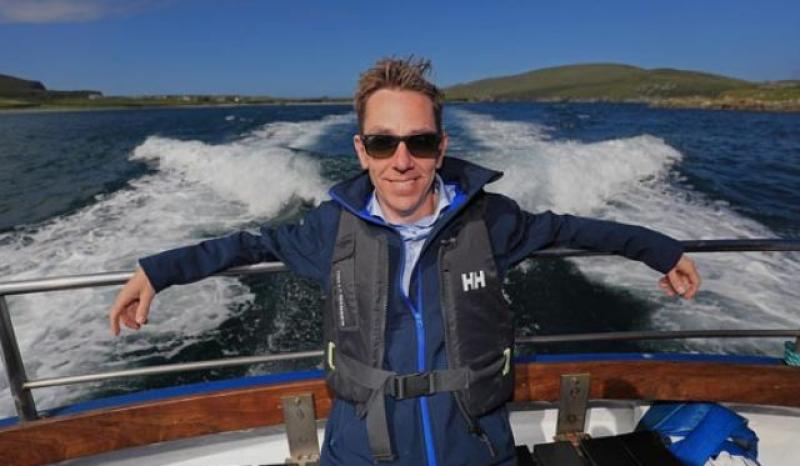 The Ryan Tubridy Show on RTE Radio 1 is coming to ‘Embrace the Wild Atlantic Way of Life’ later this month. Ryan will be broadcasting live with RTE Radio 1 from the Village Green in Malin Town on Monday, August 20 and from the Car Park in front of the main beach in Bundoran on Tuesday, August 21 as his show goes live from Donegal. The tour is known as ‘Tubs on the Wild Atlantic Way’ and will broadcast live in each location from 9 – 10am each morning. Fáilte Ireland is encouraging everyone to come along to broadcasts and to welcome Ryan and his RTE Radio 1 team to Donegal. Looking forward to the arrival of the popular RTE Radio 1 show, Joan Crawford, Wild Atlantic Way Manager, Fáilte Ireland, said: “Ryan Tubridy is a fantastic ambassador for the Wild Atlantic Way and he can really get across to his listeners what the Wild Atlantic Way is all about and how it captures people’s imagination. “This is the fifth consecutive year the show has chosen to experience the Wild Atlantic Way and Fáilte Ireland is delighted to be supporting it. “Donegal has had a great year with the hosting of the Dubai Duty Free Irish Open and the final leg of Clipper Round the World Yacht Race and we are delighted Ryan will get to experience some of the great tourism highlights in this part of the Wild Atlantic Way and of course that fantastic Donegal hospitality. “Spectators coming down to watch the broadcast - whether in Malin town or Bundoran - can expect to see plenty of festivities, interviews, live music as well as hear some fantastic local tourism experiences. “We are encouraging everyone to come on down, to arrive early and join in the fun and discover ways to ‘Embrace the Wild Atlantic Way of Life through the airwaves.” Ryan will be interviewing some local tourism businesses from the surrounding area and discussing some of the many activities and experiences available to anyone touring the Wild Atlantic Way. Commenting on his upcoming broadcast Ryan said: “There couldn’t be a better way to round off our summer travels than with a trip to Donegal’s part of the Wild Atlantic Way. “It’s one of the most beautiful parts of the country and I look forward to seeing everyone in Malin and Bundoran and to sending a radio postcard to our listeners from this beautiful corner of Ireland.” During his time in Donegal, Ryan will visit some of the beautiful, iconic spots on the Northern coast including the Inishowen/Fanad coastline where he will set off across Lough Swilly on a sailing and angling trip that takes in spectacular views of Fanad Lighthouse and Fort Dunree, the site of ‘the Flight of the Earls.’ In Bundoran, Ryan will visit the magnificent Rossnowlagh beach, explore the coastline and sea life of Donegal Bay on a sea kayaking adventure near Bundoran as well as checking out one of the famous Amusement Arcades in the town. Follow ‘Tubs on the Wild Atlantic Way’ on Twitter @wildatlanticway #wildatlanticway
ADVERTISEMENT - CONTINUE READING BELOW