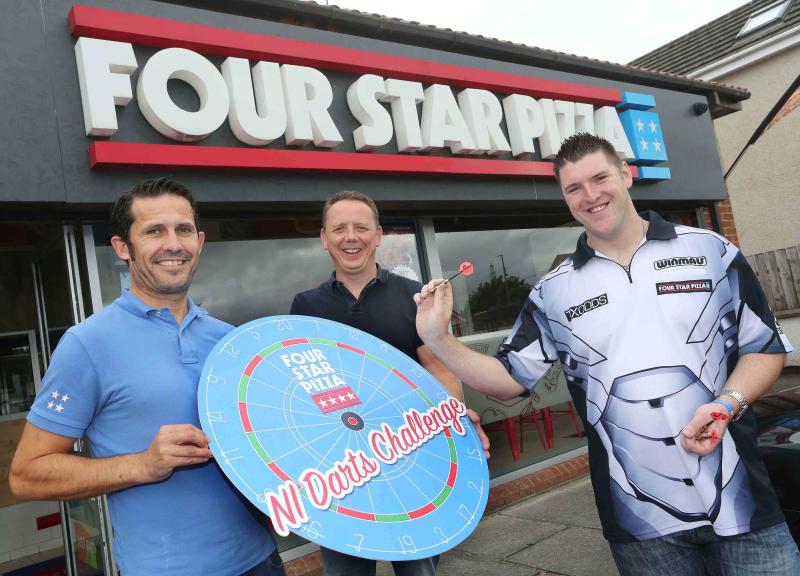 Amateur darts players in Derry could win a unique opportunity to test their skills against one of the World’s best players, Daryl Gurney, Currently ranked number five in the World, Derry man Daryl – known affectionately as ‘Superchin’ - took a break from his busy schedule to fly home for the launch of the competition, which will see darts players from all over the north compete in a one-day, winner-take-all tournament to be named the Four Star Pizza SuperChamp. As well as a unique opportunity to play a match against Daryl Gurney, the ‘Superchamp’ will also win an overnight trip for two to watch Daryl play at the Darts World Grand Prix in Dublin on September 30 as well as a year’s supply of Four Star Pizza and an official signed playing shirt from Daryl. To grab a slice of the action, local darts clubs and teams are being encouraged to register their interest for the competition at  www.fourstarpizzadarts.com and nominate a champion to represent their club or team. Nominations must be received by Friday September 7  with nominated champions invited to compete in the Grand Final on Thursday September 27 at a venue to be confirmed. Speaking at the launch of the competition, Daryl said: “It’s fantastic to be launching the first ever Four Star Pizza NI Darts Challenge and I’m really looking forward to seeing how our local players fare in the final – as well as playing a match against our winner of course. “I remember watching professional players on TV when I was younger and wondering what it would be like to play against them, so it’s great to be able to give that opportunity to players from Northern Ireland. “Northern Ireland has some brilliant darts players so I’m really looking forward to seeing who I’ll be playing against and what clubs will be taking part. “There’s always a chance that I could be playing some of the competitors in a PDC event in the future – but be warned, I’ll not be taking it easy on anyone!”, added Daryl.
ADVERTISEMENT - CONTINUE READING BELOW