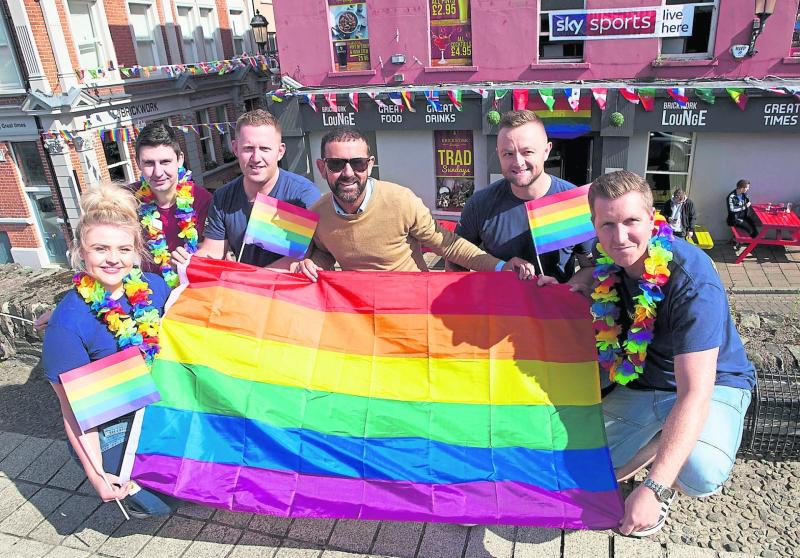 A Derry street is to be transformed into a sea of colour as part of this year's Foyle Pride celebrations. Castle Street in Derry will be transformed into 'Pride Street' ahead of this year's event, which begins on Saturday, August 18. The city will burst with colour once again this year as Derry celebrates our LGBTQ+ community at Foyle Pride Festival and even more so to celebrate its 25th year. From August 18 -26, the city will be films, talks, comedy, exhibitions and, of course, the Pride parade with inclusivity and equality at its heart, as ever. This year’s parade, which follows the route of the original Civil Rights March of 1968, will be led by civil rights campaigners, Eamonn McCann, Bernadette McAliskey, Dermy McClenaghan, Kitty I’Kane, Michael Farrell and Finbarr O’Dochartaigh alongside the present day Foyle Pride Committee. The programme of events for Pride in Derry is an ‘eclectic’ with ‘plenty of partying’ as well as numerous events throughout the week and everybody is welcome. The Mayor, SDLP Councillor John Boyle, gave the upcoming festival a resounding stamp of approval and called on people from all communities to come together to celebrate and support ‘equality, diversity and freedom during this joyful celebration’. “As Mayor of Derry City and Strabane District, I am delighted to be associated with the Foyle Pride Festival and to offer my support for what has become one of the city’s most colourful and enjoyable celebrations,” he said. “On beginning my term as First Citizen, I pledged that I would be a Mayor for all citizens and that, to the best of my ability, I would serve with integrity and honesty, regardless of religion, class, colour, sexual orientation, gender or political affiliation. “I want to pay tribute to all associated with Foyle Pride who have already been flying the flag for inclusivity and acceptance for many years, often in the face of prejudice and animosity. “The Festival is a celebration of diversity and equality which draws a growing audience of all generations each year.” Pictured above - Michael Doherty at the launch of Pride Street with, staff from Brickwork, from left, Clodagh McFeely, David Shiels, Stephen Doherty, manager, and, from right, Niall Campbell and Seamy Deans. (Photo - Tom Heaney, nwpresspics)
ADVERTISEMENT - CONTINUE READING BELOW