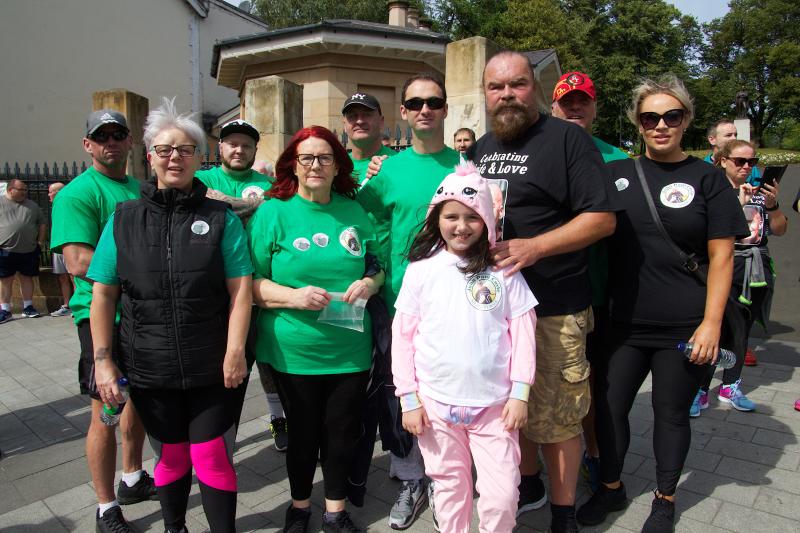 THE family of popular Derry man John Paul Coyle have spoken of their joy at the success of the first ever Memorial Walk in his honour. John Paul (known to many as JP) died suddenly earlier this year as a result of a previously undiagnosed heart condition, Cardiomyopathy. In response to the outpouring of support from right across the city following his passing, the Coyle family decided to hold the ‘John Paul Coyle Memorial Walk’ on what would have been the week of his 41st birthday. Crowds gathered at the bottom entrance of Brooke Park on Saturday and followed in the footsteps of a walk which JP had taken countless times before. Speaking on behalf of the Coyle family, JP’s sister Charlotte said that despite the sadness, the day was everything they had hoped for and more. “It was magical,” she said. “I have to say that the sense of community that came around us blew us away. I would go as far as saying that for as sad as we have been and as much as we have missed John Paul lately, it was probably one of the best days of our lives. There was so much love surrounding us and it was really healing and it was so lovely to see just how much people really loved John Paul.” The Memorial Walk took in the sights and sounds of his home town city which JP loved so well and Charlotte admitted that sharing memories with others on the day helped show just how well thought of their brother remains. “Everyone was sharing their stories and some of them were absolutely hilarious with the things he used to get up to,” she laughed. “The thing about John Paul is that he was such an honest person and he was always so genuine and had so much integrity and I think that’s why people were so attracted to him because he wasn’t scared to show you his flaws. The walk was immense, it was beautiful and we couldn’t have asked for anything more.” All proceeds from the walk will go to St. Vincent De Paul, a charity which, Charlotte admits, was close to her brother’s heart. “We’ve never arranged a charity event ever but I think we did pretty well for our first time,” she said. “It was for such an amazing charity. We raised a lot of money for St. Vincent De Paul and that’s going to change a lot of lives in Derry over Christmas and help a lot of families that are struggling.”
ADVERTISEMENT - CONTINUE READING BELOW