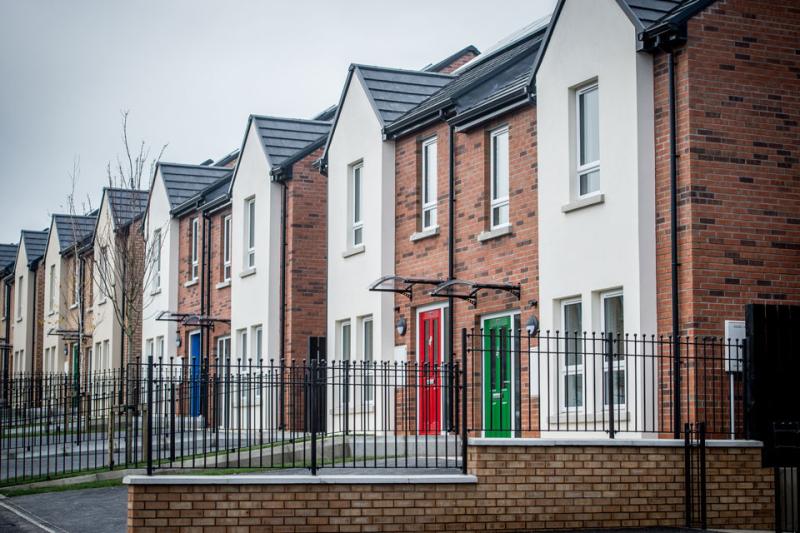 Homeless families in Derry currently on the waiting list for new social houses are being ‘forced’ to take out loans in order to pay rent in advance, it has emerged. The new policy being introduced by various Housing Associations is placing unnecessary financial strain on families already struggling to make ends meet. For many, getting a loan is not an option and others will be deemed ineligible. Those fortunate enough to get one then have to find a way to pay it back which can be extremely difficult if they’re on benefits. It is ultimately forcing people into a position where they have to turn down a home despite their desperate need. Trade Unionist Niall Mc Carroll said he has spoken to a number of ‘young homeless parents’ in Derry who have raised concerns that when they receive an offer from a housing association for a new home they are being asked to pay one or two weeks’ rent up front. “These housing associations include Apex, Clanmill, Habinteg and Radius. “This is resulting in some families not being able to move into their proposed new homes and others being forced to take out loans which they have to repay out of their benefits. “Social Housing provided in the past by the NIHE did not have this policy and when I spoke with the NIHE they did confirm this new policy was being operated by these housing associations and that some people already in receipt of housing benefit in other accommodations have been unable to get two weeks rent up front and have lost their new homes as a result of this policy and that others are being ‘forced’ to pay two weeks’ up front. ”The current situation facing not just homeless families but anyone on the housing waiting list is that unless they can get their hands on two weeks’ rent up front then they will not be allocated a home.” Responses provided by Housing Associations operating in Derry and the rest of Northern Ireland made clear that demands for advance payments is indeed their policy. The Clanmil Housing Group accepted that it asks tenants for two weeks’ housing costs in advance and believes the ‘vast majority of tenants find this manageable’. “We ask all new tenants to pay two weeks’ housing costs in advance when they sign for their new home. This is explained in the letter they receive from us when we offer them a home, so they normally have around 4 weeks’ notice.” The spokesperson continued: “While the vast majority of our new tenants find this manageable, we appreciate that for a small number of people this can pose a difficulty. In those cases all requests to waive this charge are fully considered, taking into account the individual’s circumstances. “Where appropriate we come to an arrangement with the tenant. We also offer help and support through our in-house money advice service to all prospective tenants who tell us they are having difficulty in making this payment. This payment has never resulted in someone not getting the home that we have offered them.” A spokesperson for Radius Housing said: "It is a normal condition of any social housing tenancy that rent is requested to be paid in advanced. However, Radius Housing understands the difficult circumstances some new tenants face, and in such cases we do not enforce this condition." While a spokeswoman for Apex Housing said it allocates all properties in accordance with the Housing Selection Scheme which is used by other housing associations and the Housing Executive. She added: “Apex tenancies commence on a Monday at which point the first week’s rental payment is due. Apex tenants are therefore asked to pay one week’s rent when they accept and sign for their new tenancy. If a new tenant is unable to pay the rent in advance the property is still allocated to them. “Apex works with all tenants to sustain their tenancy and provides support and advice to those facing financial difficulties.” However, Mr Mc Carroll is of the view that ‘this is the cold face of privatisation in social housing’ and ‘under public ownership through the NIHE this would not be happening’. The right-wing conservative government is ‘ultimately responsible’ for the drive towards privatisation in health and housing services but local authorities also have a duty to ‘properly scrutinise’ housing developments before granting approval, he added. “They (the conservative government) have been allowed to reach right into the middle of working class areas virtually unhindered, forcing further hardships upon those who they view as nothing more than commodities in their ideological war, a class war which garnishes the already wealthy whilst rubbing salt in the eyes of everyone else. “I would urge all those who were elected to represent the citizens of Derry and District to step in, show leadership and protect the community against the privatisation of social housing.” Habinteg did not provide a response to the query about its policy regarding up front rent before the story went to press.
ADVERTISEMENT - CONTINUE READING BELOW