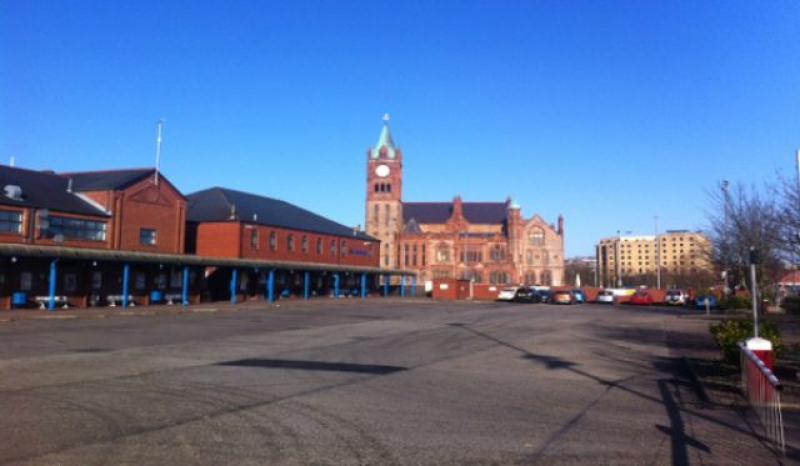 A 46-year-old Derry man with 239 convictions who threatened to shoot a cleaner at the Foyle Street bus station before hurling sectarian abuse at her has been jailed for four months. Liam Anthony Bradley, of no fixed abode, appeared at the local Magistrates Court sitting in Omagh faced four charges relating to two incidents in the bus station. The court heard that on August 8 a female cleaner asked Bradley to leave the men's toilets at the Foyle Street depot so she could clean them, where the defendant was said to refused and sworn at the woman before saying that he ‘would put one in her head’. On August 13 the court heard the same woman saw Bradley heading towards the toilets and locked them to prevent a repeat of the earlier incident. Bradley then became aggressive and swore at her even though the area was filled with children at the time. He then called the woman a ‘Catholic b*****d’ and added: “I am going to stick one on you.” The woman reported him to the police and at interview he said he would be pleading guilty. Defence solicitor George Copeland said his client had recently been released from prison and had been homeless since then. He said there was no physical contact but accepted he had put the woman in fear. District Judge Barney McElholm said: “There is a hopeless situation in this country where people are released from prison with no accommodation, no half way house or hostel. “This creates the certainty of re-offending it is long past time the legislators did something about it except we have no legislators.” Describing Bradley as ‘a complete disgrace’, Judge McElholm said that he had 239 previous convictions. Judge McElholm said the defendant won't work with probation or seek help for his addiction and added: “He doesn't even try.” The judge said if Bradley simply got drunk and made a nuisance of himself that would be one thing, but the defendant was 'frequently violent'. He added the cleaner had been 'scared out of her wits'. Judge McElholm said if the cycle of re-offending was to be broken accommodation needed to be organised before people were released. He said all that could be achieved by jailing Bradley was to give the people of Derry a respite. He recommended that people write to their legislators and that some sort of halfway house be created.
ADVERTISEMENT - CONTINUE READING BELOW