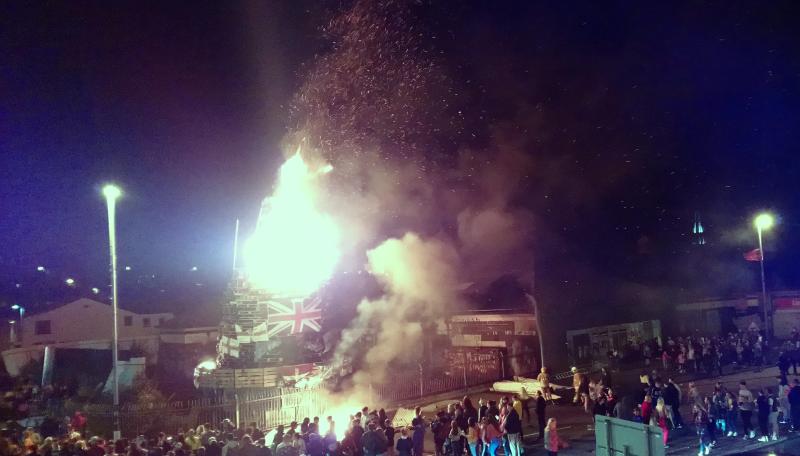 A man who had applied for a relaxation of his bail conditions so he could use his influence to get the bonfire in the Bogside moved 'did not have the requisite influence' on the young people involved, a court has heard. Jude McCrory (21) of Magowan Park is on bail charged with stealing a police officer's cap during rioting in the city on July 10. Part of those conditions was that McCrory was not allowed to enter the Bogside. On August 15 an application was made to allow McCrory to enter the Bogside to try and sort out the bonfire and this was granted on a temporary basis. At the full hearing today District Judge Barney McElholm said that McCrory was supposed to try and ensure the bonfire 'was inoffensive and passed off with minimum disruption to the local community.' He added: "It was in fact grossly offensive not least by the fact it was ignited by petrol bombs. "On top of that there were references to murdered police officers and prison staff. "Despite the best efforts this gross charade went ahead." Defence barrister Stephen Chapman said that it had proved 'physically impossible' for McCrory to get it moved in the time concerned. The judge went on: "At the very least the individuals who placed poppy wreaths, flags and the like on the bonfire were they going to stop McCrory if he had climbed up and took them down?" He then said that it was obvious the defendant did not have the necessary influence with these young people and added 'obviously there are others who influence them more'. Mr Chapman said McCrory had been asked by police to help deal with the bonfire issue. Judge McElholm said it was 'disappointing' that hundreds of people attended this bonfire as he believed 'anyone with a shred of decency when they saw this they would have turned and walked away.' He added that the best comment on the situation came from a Bogside resident who said the original bonfire was to mark the Feast of the Assumption, although he believed it probably originated with a pagan festival appropriated by the Church, but this resident commented 'the people who carried this out probably couldn't spell Assumption never mind what it meant. He refused to vary McCrory's conditions but did remove the curfew. The case was adjourned until September 19.
ADVERTISEMENT - CONTINUE READING BELOW