Inspection finds 'significant' shortfalls in hygiene, including faeces on a shower room floor, during inspection at a care home in Derry 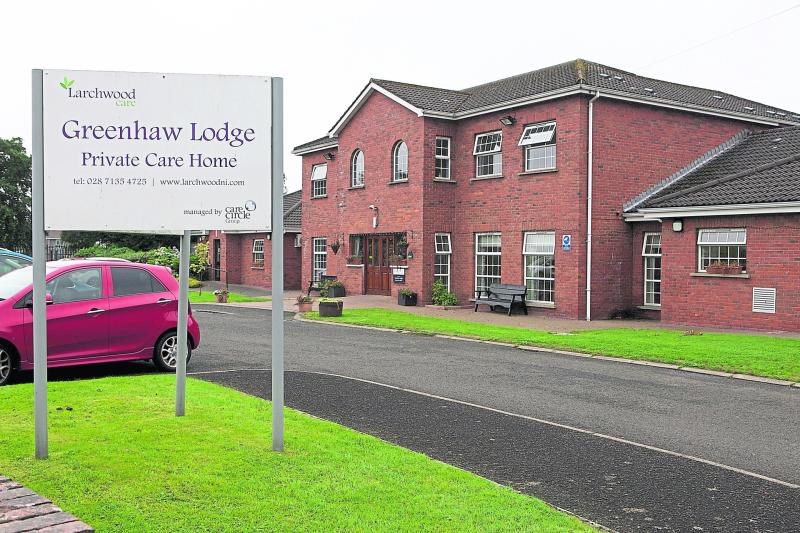 ‘SIGNIFICANT’ shortfalls in hygiene standards, including faeces on a shower room floor, were found during an inspection of a care home in Derry. Faecal stains were also found under toilet roll holders and in a staff toilet at the Greenhaw Lodge Care Centre during an unannounced inspection by the Regulation and Quality Improvement Authority (RQIA), which took place on June 14. Located on the Racecourse Road, the care home Greenhaw Lodge is a 43-bedded privately owned care home which provides care to people with dementia, as well as end of life care. The inspection, which was then published online by the RQIA, found what it described as ‘significant deficits’ with regards to the ‘delivery of care in compliance with infection, prevention and control’ at the home. These included faeces on the floor of a shower room, faecal staining observed under toilet roll holders and a staff toilet. The report showed that a ‘strong malodour and an overflowing waste bin’ was found in the same area. What was described as ‘overflowing offensive waste’ was also discovered during the inspection. In addition, the inspector found ‘limited hand hygiene’ levels among staff at the home, with ‘multiple alcohol gel dispensers empty or not working’. The inspection also found that there was no toilet check system in place at Greenhaw Lodge, with the report also recommending that shower chairs which were found to be rusted and stained now be replaced. It also noted staining on waste bins in all the communal bathrooms at the home, and stains on a hoist sling, with no plans in places to ensure that the slings are cleaned. The RQIA report also highlighted failings with cleaning and laundry at the home, with ‘no evidence of cleaning in the laundry’ observed, and ‘clutter and dirt’. The report stated that the ‘shortfalls’ were discussed with the manager who provided the inspector with assurances that these deficits would be addressed immediately, adding that an action plan was forwarded to the RQIA following the inspection. ‘Compassionate’ staff While the report did find deficits with regards to levels of hygiene, it stated that staff at the home were ‘helpful and attentive’ and were observed ‘assisting patients to enjoy their chosen activity and to eat and drink as required’. The inspector also reported that staff interactions with patients were ‘observed to be compassionate, caring and timely’. “Patients were afforded choice, privacy, dignity and respect,” the report found. “Staff were also aware of the requirements regarding patient information and patient confidentiality.” A review of the activity programme also showed that arrangements were in place to meet ‘patients’ social, religious and spiritual needs’ within the home. It did add, however, that there was no evidence of patient or relatives engagement to ‘evaluate that the activities were enjoyable, appropriate and suitable for patients’. “The programme of activities was also not displayed in a suitable format throughout the home and this was discussed with the manager and activities co-ordinator and identified as an area for improvement under the care standards,” the report continued. Staffing levels at the care home were also raised as an area of concern by the inspector. During lunchtime, staff were observed assisting patients with their meal appropriately and a registered nurse was overseeing the mealtime. “Patients able to communicate indicated that they enjoyed their meal,” the report added. “Staff demonstrated their knowledge of patients’ likes and dislikes regarding food and drinks, how to modify fluids and how to care for patients during mealtimes.” With regards to the concerns raised over hygiene, the report added that Home Manager is now responsible for auditing infection control, and environmental cleanliness and designing action plans for ‘redress of any deficits’. “A new hand hygiene audit is in place to monitor compliance of staff in this regard,” it continued. Commenting, the SDLP Health Spokesperson, Foyle MLA Mark H Durkan, called for ‘increased investment’ from management of the home to ensure that the ‘great work’ being carried out by staff at the facility is not undermined. “Families and the wider public will be concerned about the findings of this RQIA report that identified many shortcomings in terms of cleanliness,” he said. “I am well aware of the hugely challenging workload of the caring and compassionate staff in Greenhaw, indeed the report found no issues with this. “However, this report suggests that there should be an increased investment from management in keeping the place clean and reducing the risk of infection.” He added: “Otherwise, all the great work that is being done looking after vulnerable and challenging patients will be undermined.” In a statement issued to the Derry News, a spokesperson for Larchwood Care Homes (NI) Ltd, which owns the home, said that since the inspection, it has worked with the Regulator and areas in the home have now been ‘fully refurbished’. “Following an unannounced care inspection by the RQIA to Greenhaw Lodge on June 14, 2018 some areas for improvement were noted,” the spokesperson said. “The Company worked in conjunction with the Regulator following the inspection and areas in the home have since been fully refurbished and the environment updated. “During the inspection it was recognised and reported by the Regulator that ‘staff attended to patients needs in a timely and caring manner’ and that ‘staff interactions with patients were observed to be compassionate, caring and timely’.”
ADVERTISEMENT - CONTINUE READING BELOW